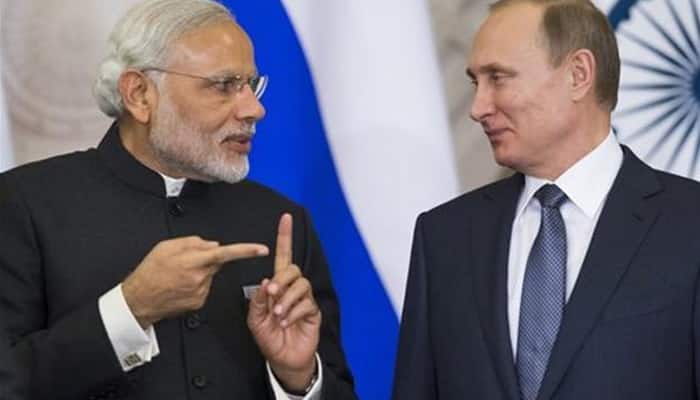 During the 17th bilateral summit between India and Russia, which is taking place barely weeks after the Uri strike by Pakistan-based terrorists, discussion on terrorism will be on the agenda.

India is likely to reaffirm its concerns over growing Russia-Pakistan military ties when the PM holds talks with Putin tomorrow.

The two countries are also likely to sign key defence deals worth billions of dollars tomorrow as Moscow hopes to stave off tough competition from the Americans and the Europeans to continue being New Delhi's foremost defence supplier.

While India and Russia will sign a "complex agreement" for the production of 200 Kamov 226T helicopters domestically under a nearly USD 1 billion deal to replace the country's ageing Cheetah and Chetak choppers, a deal on naval frigates is also likely.

On Friday, Indian Ambassador to Moscow Pankaj Saran said that the two leaders would discuss a "broad menu" of issues including new areas of co-operation like energy, infrastructure, railways, agriculture, hi-technology.

Saran said as far as Russia's recent military exercise with Pakistan was concerned, "we have conveyed our concerns and views. We are confident that Russia will reflect on our concern. That is where we stand."

Saran had earlier conveyed India opposition to Russia's joint military exercise with Pakistan, a state that "sponsors and practices terrorism as state policy" and that it will create further problems.

He also asserted that terrorism was an important issue and will be discussed between the two leaders and efforts would be to ratchet up counter-terrorism cooperation.

According to sources, India also hopes to see Russia scale down its military cooperation with Pakistan. "We feel that Russia has understood our concerns, and going forward, there will be some action (scaling down)," sources said when asked if the recent Russia-Pakistan military exercise was a one-off episode and whether Russia had registered India's concerns.

The two sides are looking at inking more than a dozen pacts including in the area of civil nuclear cooperation. The two sides have finalised the General Framework Agreement and Credit Protocol for unit 5 and 6 for Kudankulum project. They are also expected to ink defence deals worth billions of dollars.

Earlier, Modi said, "Putin's visit will give an opportunity to consolidate and reaffirm a unique time-tested friendship and partnership with Russia."

The two leaders will also exchange views on important regional and international issues, Saran said, adding: "Indo-Russia ties have more than just the bilateral dimension. There are regional and global issues, various troubled hotspots where Russia has stakes and where India has stakes."

A "very wide range" of issues will be discussed and it would be unfair to pick one or two, the envoy said and added that the agenda has a "broad menu and fully respects the kind of relationship that both country share".

The External Affairs Ministry officials also rejected suggestions of a rift between Russia and India, which recently signed Logistics Exchange Memorandum of Agreement (LEMOA) with the US, a move which is seen by many as New Delhi's moving away from its traditional ally.

"I would like to emphasize that the India-Russia special and privileged strategic partnership is characterized by unmatched mutual confidence, trust and goodwill cutting across the party lines as well as between citizens of the two countries.”

"The broad geo-polotical interest of India and Russia not only do not clash but in most cases also coincide. The bilateral partnership covers the widest possible areas of cooperation which will also be on display tomorrow," Joint Secretary dealing with Russia in MEA, GV Srinivas, said.

Srinivas also said Russia has been instrumental in securing for India the membership in Shanghai cooperation organization.

"They are the ones who supported us on MTCR (Missile Technology Control Regime) as also our application to NSG (Nuclear Suppliers Group) membership. So, there is a very good interaction between India and Russia on bilateral, regional, international levels," Srinivas said.

Saran also said, over the decades, India's relationship with "Russia has strengthened, it has deepened and it has widened. Today, it is very legitimate to talk about a comprehensive relationship.”

"In fact, it is more than a relationship, it is a partnership, and very justifiably, it has been described by the two leaders as both special and privileged as well as, of course, strategic.”

If Islamic countries can change divorce system, why not India: Prasad on triple talaq issue