Who is this man with Narendra Modi?

The man in the picture is known for his steely nerves and resolve. 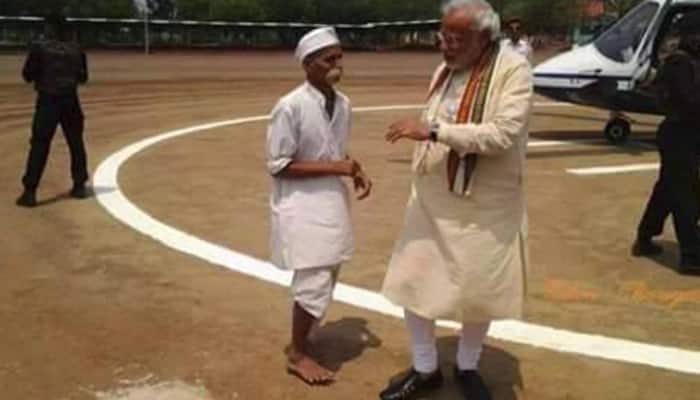 Bhide guruji did not invite me here. I came here on his orders, Modi had once said.
Share:
Written By:

New Delhi: This picture of a frail looking old man interacting with Prime Minister Narendra Modi is doing the rounds on social media.

But make no mistake, the man in the picture is anything but frail and is known for his steely nerves and resolve – someone even Modi has publicly acknowledged as an inspiration.

Meet Sambhaji Bhide, the Shiv Pratishthan strongman from the sugar belt of Satara-Sangli-Kolhapur in Maharashtra.

Known to his supporters and admirers as 'Guruji', 85-year-old Bhide is an ardent follower of Chhatrapati Shivaji and commands a massive following, especially among the youth.

“Bhide guruji did not invite me here. I came here on his orders,” Modi had said during a public rally in Maharashtra in the run-up to the Lok Sabha polls.

A staunch Hindutva activist, Sambhaji Bhide is a gold medallist in M.Sc. in Physics from Pune university and worked as a professor before he gave it up to all become a RSS full-timer.

However, he decided to chart out a path of his own in late 1980s and formed his own outfit, the Shiv Pratishtan.

Guruji is known for his simplicity. He wears no footwear and has no house of his own and has never got involved with any political party.

But Bhide Guruji has courted controversy a number of times. In 2008, he was booked after he, along with his followers, ripped out Bollywood film Jodhaa Akbar’s poster for its controversial references and stopped its screening.