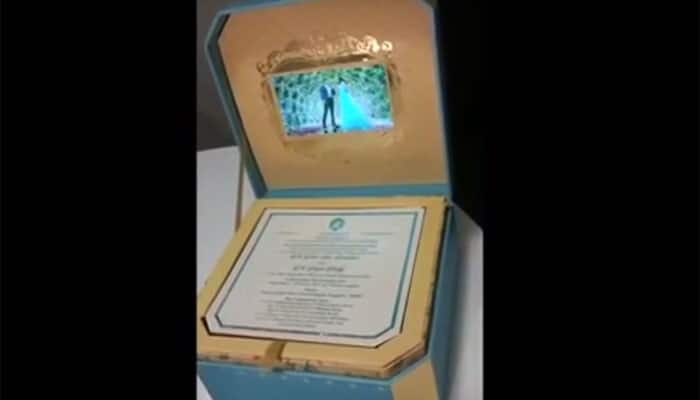 Bengaluru: Gali Janardhan Reddy, a former Karnataka minister, who raised the bar by sending out a special invitation card for his daughter's wedding, is now trying to divert the attention from the event.

The mining baron's daughter Bramhani's wedding is scheduled to take place on November 16. The gold-plated box-type wedding card with an embedded LCD screen has caught the Income Tax department's eye.

As per reports, Reddy, who has spent not less than a couple of crores on the invitation cards itself, was planning to spend over Rs 550 crore on the marriage of his daughter.

The Income Tax authorities, reports www.greatandhra.com, have started investigating as to how Reddy could get so much money for the marriage. Notably, Reddy was released last year on bail, after spending three years in jail in connection with illegal mining.

In a bid to water down the reports on the extravaganza, Reddy's associate from Bellary, G Sriramulu, said Bramhani's wedding would be a low-key affair.

“Ours is a middle class family and the wedding will take place as per the middle-class style,” Sriramulu said.

The one-minute video shows Reddy singing, or lip syncing, "Atithi Devobhava (guest is like God)" along with his wife and son.

The video ends with a close-up of the family and the date and venue of the wedding.