Chinese troops apprehended 5 Indians in Chumar of Ladakh well inside Indian territory and took them to their side of the border, in perhaps the first such incident along the Line of Actual Control. 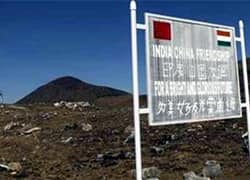 New Delhi: Chinese troops apprehended five Indian nationals in Chumar area of Ladakh well inside the Indian territory and took them to their side of the border, in perhaps the first such incident along the Line of Actual Control.
The five people were handed over to Indian side by the People`s Liberation Army troops after efforts were in this regard under the existing border mechanisms between the two countries, sources told.

The five Indian nationals along with their cattle were apprehended by the PLA troops around few kms inside the Indian territory in Chumar area and were taken to their camp across the LAC in an apparent bid to stake their claim on the area, they said.

The Army Headquarters sought to play down the incident saying that the matter was resolved "amicably" but sources said the Chinese side relented only after the local Indian Army authorities sought a flag meeting on the matter and warned that the issue would be raised at a higher level.

It is learnt that the local Army authorities on both sides established communication on the issue, they said.

The incident has come after Prime Minister Manmohan Singh signed the Border Defence Cooperation Agreement with China in October seeking to prevent any flare ups between the armies of the two countries on the LAC.

Defence Minister AK Antony had recently warned that the new border pact does not guarantee that nothing will happen in these areas in future.

Chumar has been one of the most active areas on the LAC in terms of transgressions by the Chinese troops.

Located 300km from Leh, it has always been an area of discomfort for the Chinese troops as this is the only place along the China-India border where they do not have any direct access to the LAC.

Chinese troops had recently taken away Indian cameras deployed to monitor activities there.

In July, the Chinese soldiers also barged into the area riding on horses and ponies to stake their claim on it.

In the last one year, there have been more than 200 incidents of transgressions by Chinese troops into Indian territory but the Army has sought to play them down saying these were the result of the difference in perception on the LAC.

In April, the PLA troops pitched their tents in the Depsang plains in Daulat beg Oldi sector in Ladakh and went back only after a series of flag meetings and negotiations between the two countries.