Nalini was granted 12-hour parole to travel to Chennai to be with her family at the hour of grief. 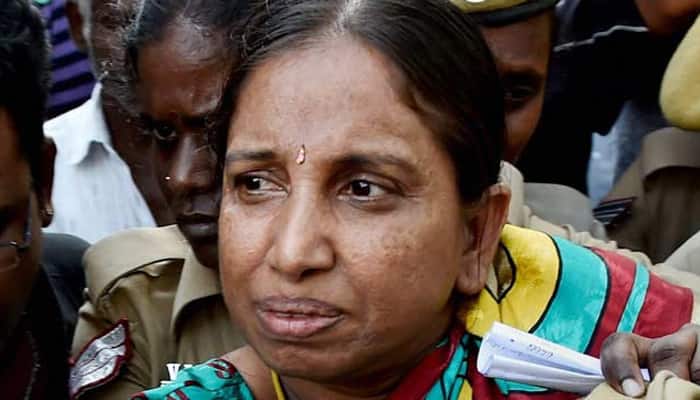 Chennai/Vellore: Nalini Sriharan, a convict in the Rajiv Gandhi assassination case, was lodged back in the Vellore Central Prision, after she attended the last rites of her father.

Nalini was granted 12-hour parole to travel to Chennai to be with her family at the hour of grief.

The sole women convict in the case, Nalini, has spent the last 25 years in prison. It was only the second time – in 2004, she was granted a similar parole to attend her brother's marriage – she was allowed to come out of the prison.

Nalini had left the Vellore prision at 6:50 am, under police escort, for her brother's residence in Kottupuram, Chennai.

She reached there at 10 am and attended the last rites of her father Sankara Narayanan. She began her return journey at around 3:30 pm and was back inside the prision by 6:45 pm.

92-year-old Sankara Narayanan, a former police inspector, passed away yesterday in Tirunelveli District. His body was brought here to his son Bhagyanathan's house at Kotturpuram.

Nalini's brother Bhagyanathan said that his sister and others convicted in the case like Perarivalan alias Arivu had spent over 25 years in prison. "I request the government to release them. They have parents in advanced age who are eagerly expecting their release," he told reporters.

Nalini was sentenced to death by the trial court in the case on January 28, 1998. Her sentence was commuted to life term by the Tamil Nadu Governor on April 24, 2000.

In December 14 last year, she had moved Madras High Court seeking a direction to Tamil Nadu government to consider her representation for premature release, saying she has undergone imprisonment for more than 24 years.