Three accused in the Bulandshahr gang-rape case have been identified as Naresh (25), Bablu (22) and Rais (28). 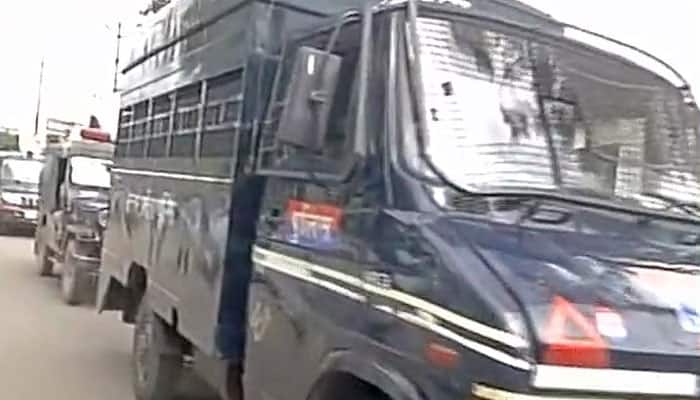 Bulandshahr: Three suspected Bawaria gang members, who were arrested in connection with the brutal gang-rape of a woman and her daughter on Friday night, were on Monday remanded to 14 days judicial custody.

The UP Police also escalated search for other members of the notorious gang even as the Opposition parties pressed for UP CM Akhilesh Yadav's resignation over declining law and order situation.

BSP chief Mayawati today lashed out at Akhlesh Yadav even as the police claimed to have arrested three bandits involved in the brutal gang-rape of a woman and her teenage daughter on gunpoint on Friday night.

If Akhilesh Yadav can’t deal with law and order situation then he should resign as CM, Mayawati said while reacting to the Bulandshahr gang-rape incident.

UP DGP Javeed Ahmed, who was rushed to Bulandshahar by Chief Minister Akhilesh Yadav after the incident at village Dostpur on Delhi-Kanpur Highway came into limelight, identified the three detained as Naresh (25), Bablu (22) and Rais (28).

Three of the those held who belonged to Bawariya gang have been identified by the victims and all the culprits would be booked under the stringent National Security Act (NSA), he said.

As the incident, which occurred near bypass when the family from Noida was from travelling to Shahjahanpur on NH-91, acquired a political hue, the Chief Minister went into a fire-fighting mode and suspended SSP Bulandshahr Vaibhav Kishan, SP City Rammohan Singh , Circle Officer (Sadar) Himanshu Gaurav and SHO Ramsen Singh of Kotwali Dehat, amid allegations of laxity by police.

The DGP accompanied by Principal Secretary (Home) visited the site of the incident on the direction of the CM.

The police chief, however, rubbished the charge that police did not act swiftly, saying they reached the spot within 20 minutes of getting information and SSP Vaibhav Krishna also arrived there.

Taking cognisance of the case, the National Commission for Women said it has sent a member to meet the victims and officials in Uttar Pradesh but added that it finds little cooperation from the state administration in such cases. UP CM will also meet the family of the victims.

NCW chief Lalitha Kumaramangalam also questioned the genuineness of the detentions made by police in the case. Opposition parties alleged that the “barbaric” incident showed that “goonda raj” was at its peak in the state where Assembly elections were due in early 2017.

BJP criticised the state government for laying expressways and highways without caring for the safety and security of the users, while BSP said such heinous crimes indicated towards deteriorating law and order situation and ‘jungle raj’ in the state.

Describing the incident as “chilling”, “barbaric” and one that has “shocked human conscience”, Congress said the state government must take decisive action in the matter.

A group of bandits had waylaid the family, dragged the women, including the 13-year-old girl, to a nearby field and raped them while the men were tied with ropes. They were also looted of their cash, jewellery and mobile phones, he said.

One of the family members, who managed to untie the rope, reported the matter to police, Krishna said.

2 hours of MCD Chunav Voting completed, 4% Voting till 9:30 am in Chandani Chowk

MCD Election: Voter present at the polling booth of Krishna Nagar said, 'I will vote for the security of the country'

Delhi MCD Election Voting: Voting begins on all 250 wards of Delhi, decision on fate of 1349 candidates

Delhi MCD Election 2022: Great fight in AAP Vs BJP, know what Pradeep Kaushal said about this?