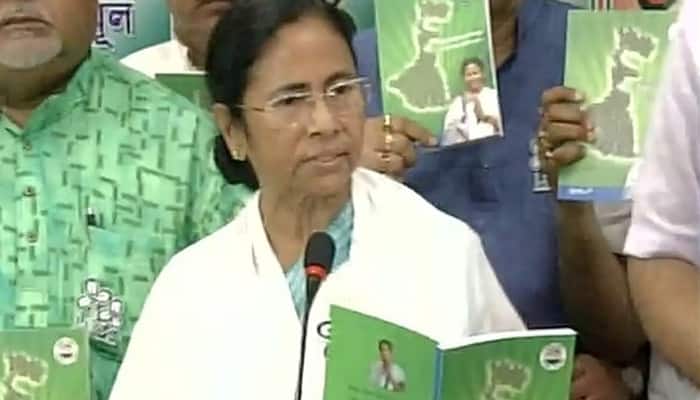 Kolkata: Ahead of the high voltage West Bengal Assembly Elections, chief minister and Trinamool Congress (TMC) chief Mamata Banerjee on Friday released party's manifesto in five different languages and expressed hope that Singur farmers will get back their land once the legal battle is over.

Addressing a press conference here during the manifesto's release function, the state chief minister said, "We promise less and do more work."

"Our party believes in policies which are necessarily people-friendly, industry-friendly and farmer-friendly, and which serve the aspirations of all people, irrespective of caste, creed and religion," Banerjee added.

She further said, "We have been maligned, conspired against by some parties."

Attacking the 'understanding' between the Left  and Congress for upcoming assembly polls, TMC supremo said, "It's an unethical alliance. When I left the Congress and formed Trinamool, I claimed that the flag of Congress had been sold to the CPI-M. My allegation has been proved now."

Sensing that CPIM is trying hard to wrest the Singur assembly seat from them by raising the land return issue, the CM said, "I hope that these farmers would get back their land once the legal battle over Singur land acquisition is over," as per Economic Times.

The manifesto which has also been uploaded on All India Trinamool Congress' (AITC) official twitter handle reads: “The ideology of Trinamool Congress is fundamentally ‘pro-people’ – a Government of the people, by the people and for the people. As a result, the central idea behind its governance has been ‘development.’ And it has been eminently successful in bringing about the development of West Bengal over the last five years, a development in all sectors of governance."

"The State is now one of the top performers in India in many aspects. Some of its schemes have won recognition at prominent international forums as well, besides being recognised as the best in India. Trinamool Congress believes in policies which are necessarily people-friendly, industry-friendly and farmer-friendly, and which serve the aspirations of all people, irrespective of caste, creed and religion,” it added.

As per some AITC tweets, apart from two other languages, the manifesto was also released in English, Bangla and Hindi.

TMC's another tweet said that the party is soon going to upload the Urdu version of the manifesto.

#BengalPolls Here is the #Manifesto2016 in English, Bengali, Hindi & Al Chiki. We will upload the Urdu version soon https://t.co/xvIFPy0YP3

West Bengal is slated to hold the seven-phase polls from April 4 to May 5. Counting of votes will be held on May 19.