Moscow said an investigation had found that the plane which took off from the Sinai resort of Sharm el-Sheikh was brought down by a bomb on board. 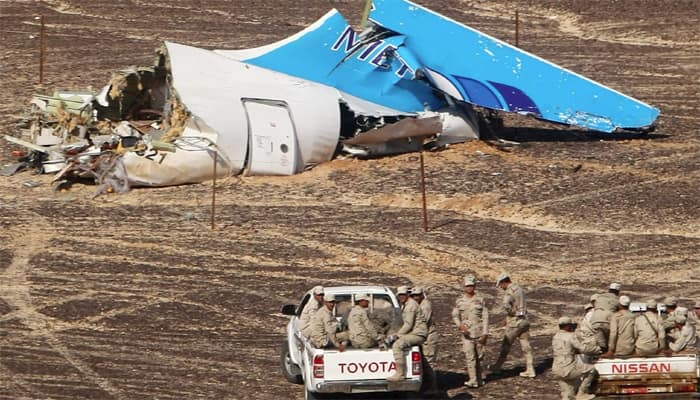 Cairo: Egypt said Monday it still has no evidence to back up Moscow`s analysis that a "terrorist" attack had downed a Russian passenger plane at the end of October in the Sinai.

The jihadist Islamic State group said it smuggled a bomb on board that blew up the Russian jet on October 31, killing all 224 people on board.

On November 17, Moscow said an investigation had found that the plane which took off from the Sinai resort of Sharm el-Sheikh was brought down by a bomb on board, a view shared by aviation experts.

"The technical committee has not received to date any indication of the presence of illicit meddling or a terrorist action," said Ayman el-Mokkadem, the Egyptian head of a probe into the crash.

"The committee continues its work concerning the technical investigation," he said in a statement released by the civil aviation ministry.

The A-321 airliner operated by Russia`s Metrojet and bound for Saint Petersburg broke up mid-air over the Sinai, minutes after take-off.

The wreckage fell several kilometres (miles) across North Sinai -- the bastion of the Egyptian branch of the Islamic State.

Days after the crash, Moscow halted all Russian flights to and from Egypt. Britain too has suspended air links with Sharm el-Sheikh.

"I can only recall the conclusion of our experts and our special services that indicates it was really a terrorist act," Kremlin spokesman Dmitri Peskov said, reacting to Mokkadem`s remarks.

On November 17, Russia`s President Vladimir Putin announced that Russian investigators had found evidence of a bomb on board, and vowed to punish the attackers.

"We will search for them anywhere they might hide. We will find them in any part of the world and punish them," he said.

The same day, Russian security chief Alexander Bortnikov said the passenger jet was brought down by a bomb with a force equivalent to one kilogram (two pounds) of TNT.

"We can say unequivocally that this was a terrorist attack," he said.

"Investigation carried out on all objects (personal belongings of passengers, baggage and parts of the aircraft) showed traces of foreign-made explosives," Bortnikov said at the time.

From the start Egypt has said there was no evidence that it was a bomb that brought the plane down, wary of the impact on its tourism sector, a cornerstone of its economy already hit by years of political turmoil.

Cairo also denies there was any laxity when it came to checking passengers or baggage at its airports.

Soon after the crash London and Moscow repatriated tens of thousands of its citizens who were holidaying in Sharm el-Sheikh.

Millions of tourists, mostly Britons and Russians, flock to Sharm el-Sheikh round the year attracted by its pristine beaches, warm weather and diving sites.

Based on information gathered by their intelligence services, Washington and London say it was likely a bomb had caused the crash.

But Egyptian media outlets dismissed such reports as part of a Western "conspiracy" aimed at harming the country`s tourism sector.