Huge blazes erupted in Syria`s Aleppo as the city was rocked by fighting and air strikes Thursday, ahead of last-ditch efforts by world powers to salvage a failed ceasefire. 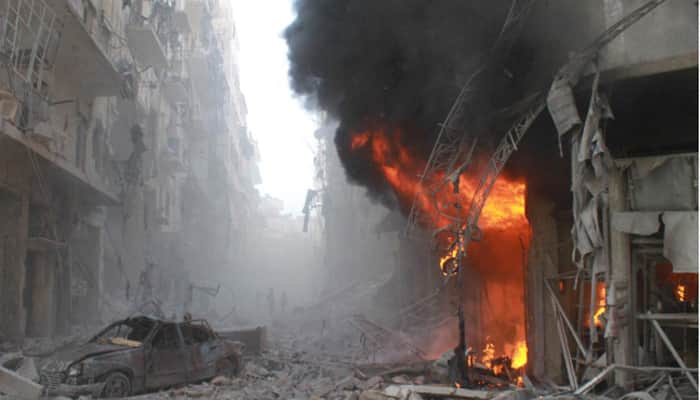 Aleppo: Huge blazes erupted in Syria`s Aleppo as the city was rocked by fighting and air strikes Thursday, ahead of last-ditch efforts by world powers to salvage a failed ceasefire.

Key players in the Syrian peace process were to meet in New York later Thursday, with the clock ticking down as the UN warned undelivered aid for desperate civilians in Aleppo would expire in four days.

The truce deal brokered by Moscow and Washington fell apart earlier this week, ushering in a surge of fighting on all major fronts of Syria`s five-year civil war.

An AFP correspondent in the eastern Bustan al-Qasr neighbourhood reported that his entire street was in flames following the pre-dawn strikes.

Volunteer firefighters battled throughout the night to contain the blazes, which local activists at the Aleppo Media Centre said were caused by "incendiary phosphorous bombs."

In footage posted by the group, a ball of flame shoots up over the city, lighting up the skyline and sparking fires on the horizon.

The Syrian Observatory for Human Rights said strikes on the rebel-held neighbourhoods of Bustan al-Qasr and Al-Kalasseh "led to massive fires" overnight.

Observatory head Rami Abdel Rahman said they were "the most intense strikes in months" on those two districts. He said raids by Russian warplanes on Thursday killed 13 people, including three women, in the city. "The non-stop strikes last night were so violent I can`t even describe them," said Ibrahim Abu al-Leith, spokesman for the White Helmets, a prominent Syrian group of emergency responders.

One volunteer was wounded in the strikes and ensuing fires, Abu al-Leith told AFP.

The White Helmets on Thursday won the Right Livelihood Award "for their outstanding bravery, compassion and humanitarian engagement", announced the jury for the Swedish human rights award, known as the "alternative Nobel prize".

Residents of east Aleppo`s have been living under government siege since early September.

Food aid promised for them under the US-Russia deal has been stalled at the border since last week and will go bad in just a few days.

"Forty trucks are sitting at the Turkish-Syrian border. The food will be expiring on Monday," the head of the UN humanitarian taskforce for Syria, Jan Egeland, told reporters in Geneva.

"The drivers are sleeping at the border and they have done so now for now a week, so please, President Assad, do your bit to enable us to get to eastern Aleppo and also the other besieged areas," Egeland said in a direct appeal to Syrian leader Bashar al-Assad.

The UN resumed its aid deliveries on Thursday after a brief pause in the wake of a strike on a humanitarian convoy in Syria`s north that killed 20 civilians and destroyed 18 aid trucks.

Thursday`s aid was going "to people in a besieged area of rural Damascus," said UN humanitarian agency spokesman Jens Laerke. Diplomatic efforts to end Syria`s war were set to continue in New York with a new meeting on Thursday of the International Syria Support Group (ISSG), chaired by Moscow and Washington.

Sounding a cautious note before Thursday`s talks, Kerry said: "It`s going to be difficult. We`ll see what people are willing to do."

During an address to the UN Security Council on Wednesday, Kerry demanded that Russia force Damascus to ground its warplanes after Monday`s deadly raid on the aid convoy.

Moscow denies that Russian or Syrian planes carried out the raid and instead said a coalition drone was in the area when the aid trucks were hit.

The US-Russia deal had called for an end to fighting between regime forces and non-jihadist rebels, excluding extremists like the Islamic State group, as well as increased aid deliveries.

It was meant to pave the way for a resumption of peace talks, which have repeatedly failed.

The UN`s deputy envoy for Syria said Thursday that he hoped talks could resume in the coming weeks, despite "grim" events on the ground.

Ramzy Ezzeldin Ramzy said his boss, UN envoy Staffan de Mistura, was in discussion with warring parties to organise "direct negotiations", a departure from past rounds where the sides met separately with moderators.
The UN is working "with a view to holding these talks hopefully in the next few weeks," he said.
On the ground, a "minister" in Syria`s opposition government was among at least 12 people killed in a car bomb attack in the southern province of Daraa on Thursday, rebel officials told AFP.
And in central Syria, 123 rebel fighters and their families were bussed out of the last opposition-held district of Homs city into northern parts of the province.