Negotiators from Ukraine, Russia and Europe are set to hold fresh peace talks on Friday in a bid to end a surge in fighting between Kiev and Kremlin-backed rebels, with tensions running high after the EU hit Moscow with more sanctions. 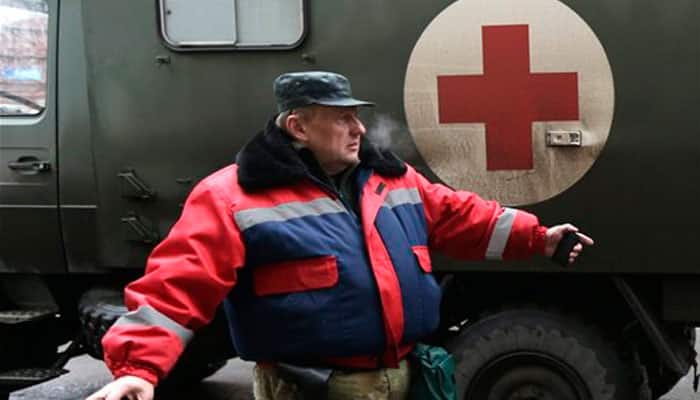 Minsk: Negotiators from Ukraine, Russia and Europe are set to hold fresh peace talks on Friday in a bid to end a surge in fighting between Kiev and Kremlin-backed rebels, with tensions running high after the EU hit Moscow with more sanctions.

The talks in Belarus`s capital Minsk will bring together the contact group of representatives of Ukraine, Russia and the Organization for Security and Cooperation in Europe (OSCE), the Belarus foreign ministry said.

But the meeting is set to be overshadowed by a deal reached by EU foreign ministers Thursday to tighten sanctions against Russia over the conflict, which the United Nations says has left at least 5,100 people dead.

"I cannot say I am happy that we have taken this decision because the situation on the ground is nothing to be happy about," EU foreign policy chief Federica Mogherini told a press conference in Brussels.

"But the one thing I can be happy about is that we have kept our unity."

The United States welcomed the EU move, and warned Russia that it was mulling fresh sanctions of its own.

State Department spokeswoman Jen Psaki said the EU agreement was "a further sign that the actions of the last several days and weeks are absolutely unacceptable and that there will be new consequences put in place."

The EU deal extends a series of targeted sanctions -- hitting more than 100 Russian and Ukrainian figures -- by six months until September. The sanctions were introduced after Russia annexed the peninsula of Crimea from Ukraine last March.

Foreign ministers also agreed to come up with more names to be hit with the travel bans and asset freezes within a week, and to start work on further "appropriate action" if Moscow and the rebels keep breaching a largely disregarded peace deal signed in Minsk in September.

That could open the door for the widening of much tougher sectoral sanctions hurting the Russian economy which were introduced after the shooting down of Malaysia Airlines flight MH17 over eastern Ukraine in July.

Greece`s new Prime Minister Alexis Tsipras, who is close to Russia, had raised doubts about the need for more sanctions earlier in the week, but fears that Athens could veto new measures failed to materialise.Kiev and local officials said six civilians and five Ukrainian soldiers had been killed over the previous 24 hours.

The West says Russian forces are in Ukraine supporting the rebels -- a charge the Kremlin denies -- and has urged Moscow repeatedly to respect the Minsk peace deal.

Ukraine`s Western-backed President Petro Poroshenko had earlier called for urgent talks, saying they should lead to "an immediate ceasefire and the withdrawal of heavy weapons from the line of contact".

Pro-Russian militants last week pulled out of peace talks and announced a new offensive that was followed by a rocket attack on the strategic port of Mariupol in which 31 civilians died.

Gorbachev, the last Soviet leader, appeared to pin the blame on the West for the worsening situation, saying sanctions which had cut Russian access to US and European capital markets threatened to spiral into open warfare.

"Where will that lead all of us? A Cold War is already being waged openly. What`s next?" the 83-year-old Nobel peace prize winner asked. "Unfortunately I cannot say for sure that a Cold War will not lead to a `hot` one."

Russia`s resurgence has alarmed eastern members of the EU that used to be in the Soviet sphere of influence.

Poland, which has taken a harsh tone against Moscow, said Thursday it would soon allow civilians to sign up for military training as it boosts its defence system due to anxiety over events in Ukraine.

The Ukrainian rebels have made good their threat to push into the important eastern industrial lands that still answer to Kiev, with fears that they could open up a land corridor linking Russia to the annexed Black Sea peninsula of Crimea.

Combined with a slump in oil prices, the Western sanctions have plunged Russia into recession and seen Standard and Poor`s slap a "junk" rating on Moscow`s debt.