Uzbekistan bade farewell to President Islam Karimov at a high-security funeral on Saturday, after his death plunged the country into the greatest period of uncertainty in its post-Soviet history with no clear successor to the iron-fisted ruler. 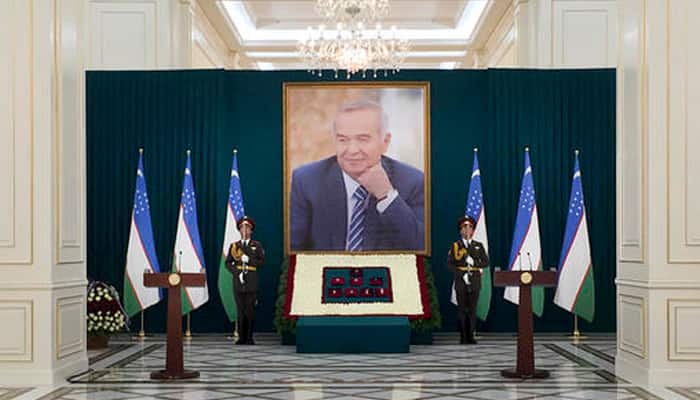 Samarkand: Uzbekistan bade farewell to President Islam Karimov at a high-security funeral on Saturday, after his death plunged the country into the greatest period of uncertainty in its post-Soviet history with no clear successor to the iron-fisted ruler.

Karimov, 78, was pronounced dead late Friday after he suffered a stroke last weekend and fell into a coma, authorities said, following days of speculation that officials were delaying making his death public.

The Islamic funeral for the strongman -- who dominated the ex-Soviet nation for some 27 years -- was being held in his home city of Samarkand, southwestern Uzbekistan, on Saturday and the country will begin three days of mourning.

An AFP journalist in the famed Silk Road city -- which houses the mausoleum of feared 14th century warlord Tamerlane -- said police had cordoned off the centre and were not letting ordinary citizens or cars through.

Despite his brutal quarter-century rule, which earned him a reputation abroad as one of the region`s most savage despots who ruthlessly stamped out opposition, people in Karimov`s hometown mourned his passing and some youths wore black clothes."When we found out about his death, all my family -- by wife, my son`s wife, the children -- we were all crying, we couldn`t believe it," one local man, 58, told AFP, refusing to give his name.

"It is a great loss for every Uzbek. He made out country free and developed."

State television in the tightly-controlled nation earlier reported the coffin had arrived by plane in Samarkand accompanied by Karimov`s widow and younger daughter.

Crowds of people had earlier reportedly lined the road to watch and throw flowers at the cortege as it drove through the capital Tashkent.

Authorities said Karimov`s coffin would be displayed in a city square for people to pay their last respects before he is buried in a nearby cemetery later Saturday next to other family members.

Eyewitnesses told AFP that they had seen the vehicles carrying the coffin head towards Samarkand`s UNESCO World Heritage site centre but that the event was open only to guests with official invitations.

Russian Prime Minister Dmitry Medvedev flew in for the funeral, along with leaders from former Soviet republics including Tajik President Emomali Rakhmon, Turkmen President Gurbanguly Berdymukhamedov and the prime ministers of Kyrgyzstan, Belarus and Kazakhstan.

Loyalist Prime Minister Shavkat Mirziyoyev heads the organising committee for the funeral, in a sign that he could be the frontrunner to take over long-term from Karimov.

Under Uzbek law, senate head Nigmatulla Yuldashev has now become acting president until early elections are held.Karimov was one of a handful of Soviet strongmen who clung to power after their homelands gained independence from Moscow in 1991, and he played Russia, the West and China off against each other.

The most serious challenge to his rule came from his eldest daughter, once seen as a possible heir, whom he put under house arrest in 2014 after a family power struggle erupted publicly.

Uzbekistan has never held elections deemed free and fair by international monitors, and Karimov won his fifth terms in office last March with 90 percent of the vote.

His death pushes the strategically located landlocked country into a "phase of uncertainty", the head of the Russian lower house of parliament`s international affairs committee, Alexei Pushkov, said Friday.

Rights groups -- which have long accused Karimov`s regime of the most serious abuses including torture and forced labour in the lucrative cotton industry -- have slammed his time in power as a catastrophe for Uzbekistan.

But Karimov portrayed himself as guarantor of stability and bulwark against radical Islam on the borders of Afghanistan, crushing fundamentalist groups in the majority Muslim republic."Islam Karimov leaves a legacy of a quarter century of ruthless repression," said Steve Swerdlow, Central Asia researcher at Human Rights Watch.

"Karimov ruled through fear to erect a system synonymous with the worst human rights abuses: torture, disappearances, forced labour, and the systematic crushing of dissent."

Despite Karimov`s brutal record, Uzbekistan still receives US aid and both Secretary of State John Kerry and Russian leader Vladimir Putin have jetted in for talks over the past year.

As world powers continue to vie for influence, activists question how the nation`s rights record can ever improve.