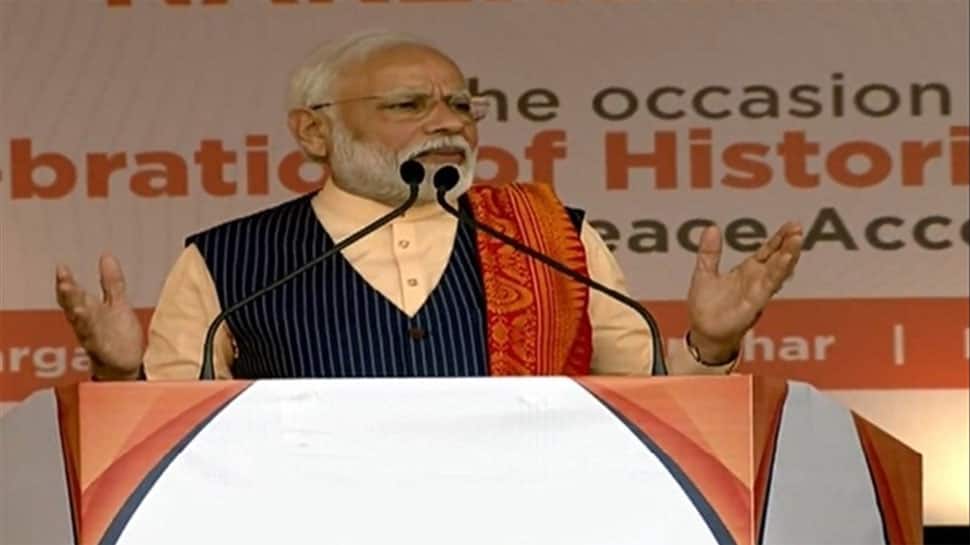 Kokrajhar (Assam): Prime Minister Narendra Modi on Friday said the Citizenship Amendment Act (CAA) will not have any effect on the people of Assam and North-East region."Some forces are spreading rumours in Assam and Northeast with full force that the people who get citizenship under the CAA will come here to settle. I assure the people of Assam that nothing like this will happen," said Prime Minister Modi while addressing an event organised to celebrate the Bodo agreement with the Centre.

"I am fully aware of your aspirations, your happiness, and sorrows. Just as all the illusions are finished, all the demands, the companions associated with the Bodo society have come together. I hope all the illusions of other people will soon be over," he said.

"Earlier, the states of Northeast were looked upon as seekers of help. Today, they are considered as growth-engines for development. Earlier, this region was thought to be far from Delhi. Today, Delhi is very close to you and hears you with care," he said.

It was also the first visit of Prime Minister Modi since Assam and other parts of the North-East region witnessed anti-CAA protests. "Political parties used to ignore revolts, blockades, and violent protests. They just contained them but never solved them. This approach had pushed the people of Northeast so far that they had stopped believing in democracy," he said.

The Prime Minister said the entire issue of Northeast was serious and the BJP-led government worked on it with a new approach. "We understood the aspirations and emotional context of different regions of the Northeast. We conversed with them and made them feel one of our own. This has helped us reduce extremism. Earlier, there were about 1000 killings in the Northeast due to extremism but today the situation is normal," he said.

Modi also said that the Bru-Reang crisis was resolved after an agreement was signed. "Thousands of families will now have their residential houses after signing this agreement, bringing an end to a problem that pestered for about 2.5 decades," he said.

The Prime Minister said the people were afraid of coming here at one point of time."In the North-East, thousands of people became refugees in their own country due to violence. They are now being given new facilities to settle here with full respect and dignity," Modi said.