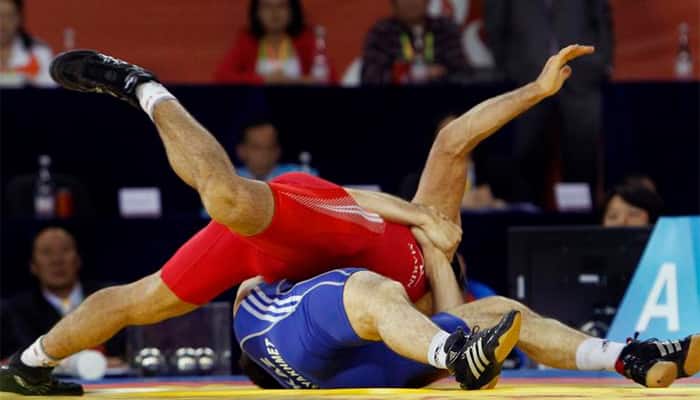 Xi'an (China): India wrapped up their campaign at the Asian Wrestling Championships on a resounding note with 16 medals after Greco-Roman grapplers added a silver and a bronze on the concluding day here on Sunday.

Harpreet Singh settled for a silver in 82kg while Gyanender won a bronze in 60kg on the final day of competition.

With this performance, India's Greco-Roman wrestlers have bettered their tally of two bronze from the last edition and is the country's best-ever showing in this discipline so far at the Asian Championships.

After a strong show en route to the final, Harpreet Singh had to settle for the second-best position to get his first silver medal after three consecutive bronze from this prestigious tournament.

In the final, Iran's Saeid Morad Abdvali, a former world champion and Olympic medallist, did not allow the Indian to settle as he went on to register a comfortable 8-0 win by Technical Superiority over Harpreet.

Harpreet had earlier put up an impressive performance to storm into the gold medal round, having thrashed Haitao Qian of China 10-1 in the semifinals after handing a 5-1 defeat to Burgo Beishaliev of Kyrgyzstan in his last-eight stage bout.

"I gave my all but it wasn't my day, especially an opponent who is a former world champion and Olympic medallist, was too strong. I am still happy to have bettered the colour of my medal from last year and hopefully will be able to bring more laurels for India in future," said Harpreet after the final.

Gyanender, meanwhile, stamped his authority over Jui Chi Huang of Taipei and bagged the third position with a 9-0 victory in the bronze medal play-off bout.

For Gyanender, a quarterfinal round win over Ali Abed Alnaser Ali Abuseif of Jordan 9-1 was followed by a 0-9 defeat against Islomjon Bakhramov of Uzbekistan in the semifinal.

In contrast, Yogesh lost out on a podium finish in 72kg category after being beaten by Ruslan Tsarev of Kyrgyzstan in the third-fourth place match.

Yogesh had entered the bronze medal bout despite losing his qualifying match to Hujun Zhang of China 0-9 as his Chinese opponent made the gold medal round.

However, two other Indians in the fray on Sunday -- Ravinder and Hardeep -- crashed out early. While Ravinder bowed out in 67kg after losing his qualification bout, Hardeep suffered defeat in 97kg quarterfinal bout.