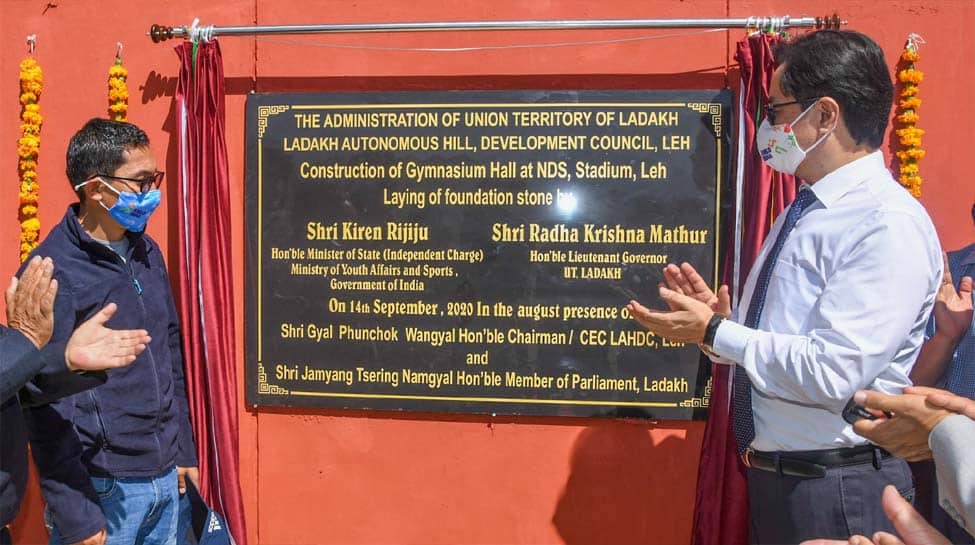 Rijiju also laid foundation for a synthetic track and astroturf for football in Lehat Open Stadium. The estimated cost of the project is Rs 10.68 crore and it is scheduled to be completed by January, 2021.

Meanwhile, the construction of Gymnasium Hall in NDS indoor stadium would cost upto Rs 1.52 crore and the project is expected to be completed by March 2021.

Reflecting on the same, Rijiju said that under the leadership of Prime Minister Narendra Modi, the union goverment is inculcating a sporting culture in the country which is in turn keeping the countrymeny healthy and fit.

Great day for sports in Ladakh!
Laid foundation stone for Synthetic Track & Astro Turf for Football and Gymnasium Hall at NDS Stadium in Leh.
Within short time, these projects are initiated to fulfill the aspirations of the people of Ladakh & commitment of PM @narendramodi Ji. pic.twitter.com/o4MytZX762

Rijiju further stressed that Khelo India, University Games and Winter Games across various places of the country are encouraging the students, youth and people to take part in sporting activities.

He also highlighted the significant of sports and the efforts of the government in establishing the predominance of India in the world sports events.

Rijiju also suggested the Ladakh UT Administration to constitute awards and incentives like jobs for local sports persons to encourage them to excel in the sporting field besides also asking the Ice Hockey Associations across the country to come together to get the recognition for the sport.

Speaking on the occasion, Ladakh Lieutenant Governor RK Mathur appealed to the Sports Minister to tap the potential in Ladakh for sports development. He further suggested that during the winters, people from other parts of the country should come to Ladakh to experience and learn winter sports.

As part of month-and-half-long Fit India Freedom Run from August 15 to October 2, the Sports Minister personally participated in Cyclothon earlier in the day along with MP Jamyang Namgyal and local cyclists.