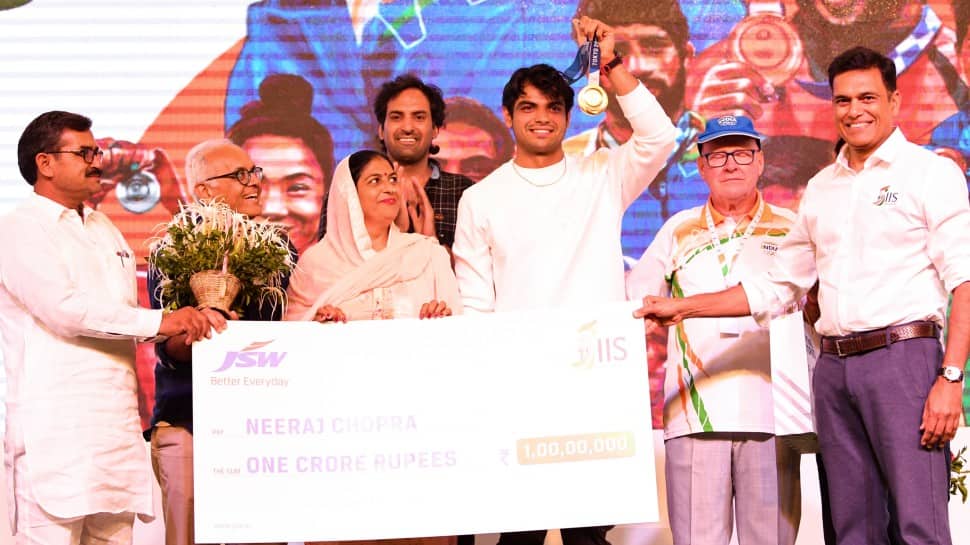 The JSW Group organised a felicitation ceremony at the Inspire Institute of Sport in Bellary that had Neeraj Chopra, Bajrang Punia, Ravi Dahiya and PR Sreejesh in attendance to recognise and reward India’s best-ever performance at an Olympic Games. The Saturday afternoon began with the felicitation of the eight athletes, who trained at the Inspire Institute of Sport (IIS) for the Tokyo Games.

Neeraj Chopra said his gold medal in the Tokyo Olympics is just the start of the global success that athletes will achieve in the future. “I am always very happy to be here at IIS because, for me, this feels like home. This is where I have spent time recovering from my injury not long ago and worked hard to reach the level that was needed for me to bring home the Olympic gold,” said Neeraj in a statement.

“The facilities here are fantastic and the care you get is second to none. You also get motivated by watching others train alongside you, and I am sure my Gold medal is just the start of global success that athletes from here are bound to achieve,” he added.

He made his way back to the facility where his Olympic victory was crafted, and @Neeraj_chopra1 stopped by our #Paris2024 countdown to remind us that there's so much more to come! #CraftingVictories pic.twitter.com/Ie2mBu0MO1

JSW Group presented awards to the athletes amounting to more than Rs 25 million. The JSW Sports management also felicitated Neeraj Chopra and Bajrang Punia’s coaches at the Inspire Institute of Sport, who had a tremendous impact on both the athletes’ performances at the Tokyo Games.

“We have won seven medals at the Olympics and 19 at the Paralympics, and that’s the clearest indication that India is moving to greater heights on the world stage. When we decided to build the Inspire Institute of Sport, the idea was to build a world-class facility that would be one of the best,” said Sajjan Jindal, chairman and MD JSW Group.

“We always wondered how our Indian athletes will compete on the global stage, can we go toe to toe with the best in the world? The likes of Neeraj (Chopra), Ravi (Kumar Dahiya) and everyone else have shown that we can be right at the top. Apart from IIS in Bellary, we have also created a similar setup in Hisar (Haryana) for Wrestling and Boxing, we are planning a similar centre in the North-East part of the country, and a high-altitude training facility in Himachal Pradesh,” he further said.

“India is a developed country whose corporate sector is very strong, and the IIS is a testimony of the private-public partnership, and if we go further down the same road into schools and colleges across the country, I am sure India has the potential to win many more medals at the Olympics,” Jindal added.

PM Narendra Modi interacts with Paralympic stars, says 'You all are ambassadors of the country'