Nitesh Kumar with a High 5 was the star in the Yoddha defence, which tackled this season's best raiding unit out of the match. 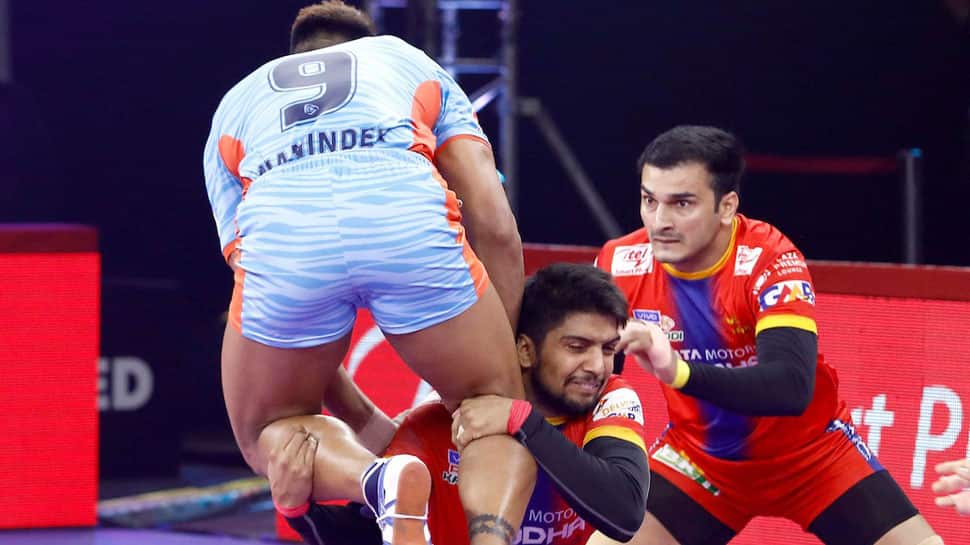 UP Yoddha produced a defensive masterclass to outfox Bengal Warriors 32-29 in a Pro Kabaddi League Season 7 contest at the Sree Kanteerava Stadium on Sunday.

Nitesh Kumar with a High 5 was the star in the Yoddha defence, which tackled this season's best raiding unit out of the match.

The Warriors raced to a quick start with their raiding trio of Maninder Singh, K. Prapanjan and Mohammad Nabibakhsh looking in form. The Bengal side went into the match as the best raiding unit in Season 7 (19.8 average raid points) and quickly took the lead.

Monu Goyat's absence in the Yoddha team meant the raiding duties fell in the hands of an out-of-form Rishank Devadiga and the raider once again struggled to impress on the mat. But Nitesh Kumar's two Super Tackles kept the UP side in the game.

Ankush came in for Yoddha with 7 minutes remaining in the first half and the young raider more than rose up to the challenge, securing two touch-points in a Do-Or-Die raid to bring his team right back into the match. The Warriors led 13-12 at the break.

The UP side had the momentum with them in the early minutes of the second half with Shrikant Jadhav producing an important two-point raid in the third minute, taking out Rinku Narwal and K. Prapanjan. Three minutes later, Yoddha sealed an All-Out to move to a two-point lead (19-17).

Yoddha's defensive pair of Nitesh Kumar and Sumit were in outstanding form, not allowing Maninder and Prapanjan a chance to pick up points while at the other end, Baldev Singh, who secured a High 5, and Rinku Narwal were equally impressive for the Warriors' defence.

Yoddha moved to a three-point lead with less than three minutes left on the clock after Warriors floundered in a Do-Or-Die situation. The defence ensured that Yoddha remained focused till the end to seal an important victory and avenge their 31-point defeat at the hands of Warriors earlier in the season.