Siblings Day 2020: A look at famous siblings from the field of sports

Hardik and Krunal Pandya have been playing together for the Indian Premier League (IPL) franchise Mumbai Indians for the last four years. 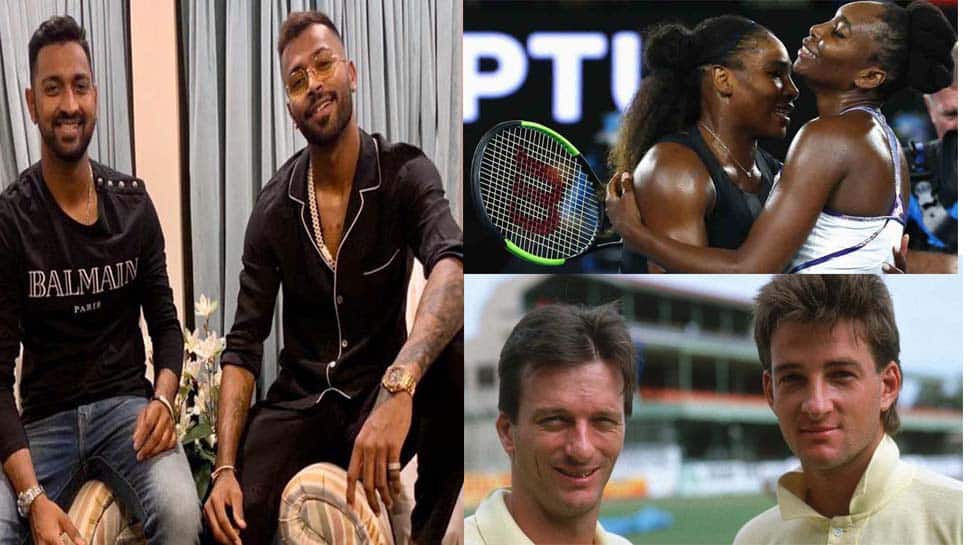 April 10 is observed as Siblings Day every year by many across the world in order to honour the bond of brothers and sisters.In sports fraternity, there are many sibling pairs who have carved a niche for themselves by playing for their country.

From cricketer brothers Hardik Pandya and Krunal Pandya to American tennis greats Serena Williams and Venus Williams, all of them have managed to find a place in the hearts of the audience.

Let us take a look at some of them:

Indian all-rounders Hardik and Krunal Pandya are one of the best sets of siblings in the field of cricket. The duo have been playing together for the Indian Premier League (IPL) franchise Mumbai Indians for the last four years.The pair has also been part of Mumbai Indian's winning campaign in the 2017 and 2019 seasons.

Krunal Pandya made his international debut for the Men in Blue during a T20I series against West Indies in November 2018 and since then, he appeared in 18 matches for India in the shortest format of the game, bagging 14 wickets and scoring 121 runs.

Hardik, on the other hand, began his international career during an ODI series against New Zealand in October 2016. He has represented India in 11 Tests, 54 ODIs and 40 T20Is, amassing 1,799 runs across all formats and claiming 109 wickets.

Irfan is the fastest bowler from the country to pick up 100 ODI wickets in just 59 matches. He finished his international career with a total of 310 wickets and is the only bowler to have managed to take hat-trick in the very first over of a Test during a match against Pakistan in Karachi in 2006.

Yusuf, on the other hand, has two international centuries to his name and was also a handy part time off-spinner as he claimed 50 wickets in his career with the national team.

Williams sisters and American tennis stars Serena and Venus have both managed to grab the world number one spot in the women's singles ranking during their career so far. The pair is one of the greatest sets of siblings in the field of sports. The duo was coached by their parents from an early age.

While Serena has 22 Grand Slam singles titles to her name, elder sister Venus is a seven-time Grand Slam champion.

On April 5 in 1991, Waugh brothers-Steve and Mark-- of Australia became the first pair of twins to feature together in the longest format of the game.
The history was created during Australia's third Test of the five-match series against West Indies at Trinidad which ended in a draw.

The twin bothers eventually went on to play 108 Test matches together for the Australian men's cricket team.

Steve made 493 appearances for Australia and scored 18,500 runs, including 35 centuries, besides also leading the side in the longest format of the game. He also served as Australia's captain in the ICC World Cup 1999.

Mark, on the other hand, has 16,529 international runs and 38 centuries to his name.

The famous Bryan brothers--Bob and Mike-- have played several tennis matches together. The identical twins have clinched over 100 Association for Tennis Professionals (ATP) doubles titles, including 30 Grand Slam together and a gold medal at the Olympic Games in London in 2012.

Shaun Marsh and Mitchell Marsh have got chance to represent Australia in a lot of matches together. Individually, batsman Shaun has notched up 13 centuries in 124 appearances he made for the national side. He also scored most number of runs in the 2008 edition of the Indian Premier League (IPL) for Kings XI Punjab and received the Orange Cap for smashing 616 runs in 11 innings.

All-rounder Mitchell, on the other hand, has represented Australia in 95 matches across the three formats and scored over 3,000 runs besides grabbing 85 wickets in it. He was also the part of the Australian squad that won 2015 ICC World Cup.

British tennis star Andy Murray and Jamie Murray are the first brothers ever who have managed to  simultaneously occupy the top spot in the ATP rankings.

While Murray had claimed the top spot in the men's singles rankings, Jamie and his partner Bruno Soares occupied the world number one place in the men’s doubles rankings in 2016.