Neeraj Chopra, wearing a mask and an India team jersey, was mobbed the moment he came out of the airport and despite the best efforts of security personnel, enthusiastic fans with garlands in hand, tried to get as close to the champion javelin thrower as possible. 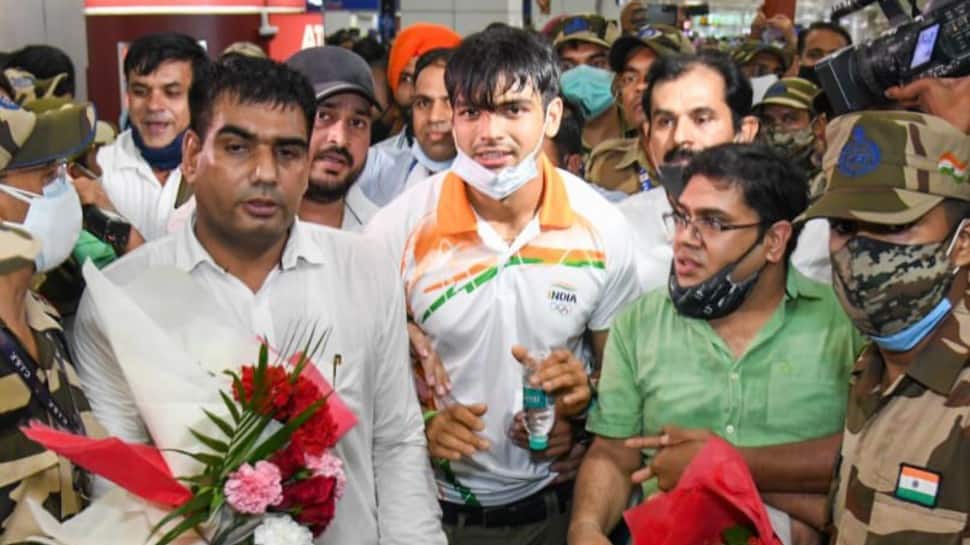 Tokyo Olympic Games gold-medallist, javelin thrower, Neeraj Chopra, was mobbed by loving fans at the Indira Gandhi International Airport the moment he emerged from the arrival lounge with security personnel -- numbering in hundreds -- unable to control the surge despite putting in place a 'fool-proof' security arrangement.

Chopra, wearing a mask and an India team jersey, was mobbed the moment he came out and despite the best efforts of security personnel, enthusiastic fans with garlands in hand, tried to get as close to the champion javelin thrower as possible.

Not to be left behind, the electronic media with mikes and cameras in hand, jostled with the fans to get some bytes from the ace athlete. After a lot of jostling, Chopra finally made it to a waiting white car as it slowly made its way through the sea of humanity and proceeded to the Ashoka Hotel, where the Indian medal winners will be felicitated by the Union Sports Minister, Anurag Thakur, later in the evening.

Hotel Ashoka wore a festive look with the lobby being decked with marigold flowers, ceremonial lanterns and Olympic rings to welcome Indian heroes.

The lobby, especially, looked resplendent, shimmering in the incandescence of the special lighting arrangements made to welcome the medals winners and other achievers in Tokyo, who landed at the Indira Gandhi International Airport at 5:30 pm on Monday amid tight security.

The Olympians and their support staff, who arrived by Air India flight No. 307, were taken straight to the Ashoka Hotel in a Volvo buses. The security at the airport was unusually tight with multiple forces, including Indo-Tibetan Border Police (ITBP), Central Industrial Security Force (CISF), pressed into service to manage the hundreds of fans, who had descended at the airport to welcome their heroes.

But despite multiple security cordons, chaos reigned the moment the athletes started trooping out of the arrival lounge. All hell broke loose and it required loads of patience from the security personnel to control the situation.

Earlier, a team comprising senior police officials under the Airport Police station had checked Terminal-2 and Terminal-3 where the flight carrying Indian athletes had landed.