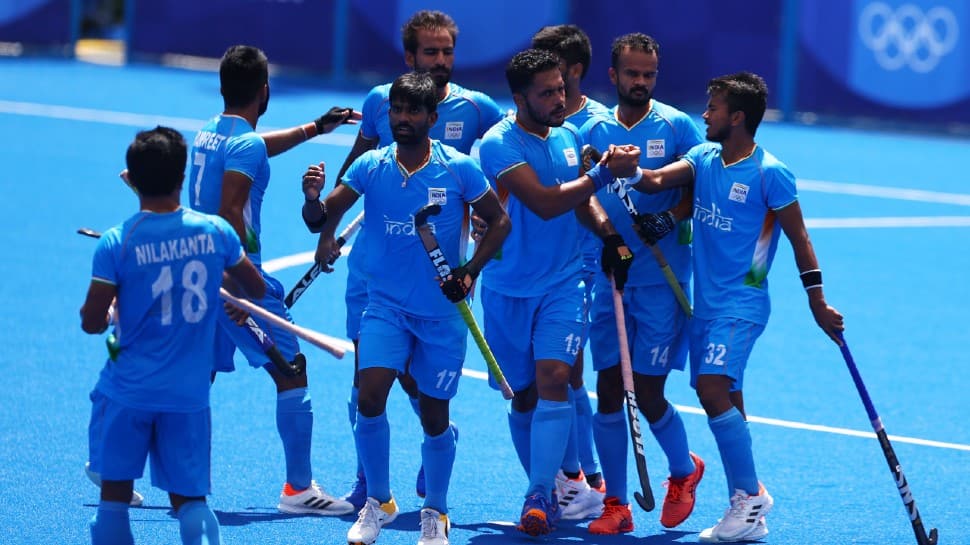 Indian men's hockey team created history at the Tokyo Olympics by winning a bronze, their first medal in 41 years from the sport. Manpreet Singh's side defeated Germany 5-4 in a thrilling third-place clash on Thursday (August 5) to come away with the bronze medal. It was a sensational comeback by the Indian side as they came back from 1-3 down in the 2nd quarter to win 5-4.

Germany managed to claw back into the bronze medal match of the Tokyo Olympics on Thursday (August 5) as Lukas Windfeder scored the fourth goals for the European side to bring them to 4-5 against a resurgent Indian side in the fourth quarter.  India scored two goals immediately after the start of third quarter with Simranjeet Singh adding a second goals of the match give 5-3 lead over Germany in the bronze medal match at the Tokyo Olympics. India secured a penalty stroke a minute into the third quarter of their bronze medal match against Germany and Rupinderpal Singh converted from the spot to put his side up 4-3.

Indians managed to score four goals in the last six minutes of the game after going down 1-3. Harmanpreet Singh converted India's third penalty corner of the bronze medal match against Germany to help India level the 3-3 with just over a minute left in the second quarter.

This was Harmanpreet Singh's sixth goal of the Tokyo Olympics. Hardik Singh kept India in the hunt in the bronze medal match against Germany with his strike in the second half of second quarter reducing the scoreline to 2-3 . Germany's Nicholas Wellen put his side back in front with his 24th minute strike with Benedikt Furt adding a third a minute later to put the Europeans ahead 3-1 in the 2nd quarter.

The eight-time former gold-winners, who battled a heartbreaking slump in the last four decades, made the resurgence of the last couple of years count in the best way possible with an Olympic medal. Simranjeet Singh (17th, 34th minutes) scored a brace, while Hardik Singh (27th), Harmanpreet Singh (29th) and Rupinder Pal Singh (31st) were the other goal getters for India.

Germany's goals were scored by Timur Oruz (2nd), Niklas Wellen (24th), Benedikt Furk (25th) and Lukas Windfeder (48th). Determined to clinch a medal, the Indians made one of the most memorable comebacks in the history of the game, fighting back from a two-goal deficit to turn the match in their favour.

There were tears and hugs on the field as the Indians led by Manpreet Singh and coached by Australian Graham Reid savoured the historic moment. It is India's third hockey bronze medal in the history of the Olympics. The other two came in 1968 Mexico City and the 1972 Munich Games.