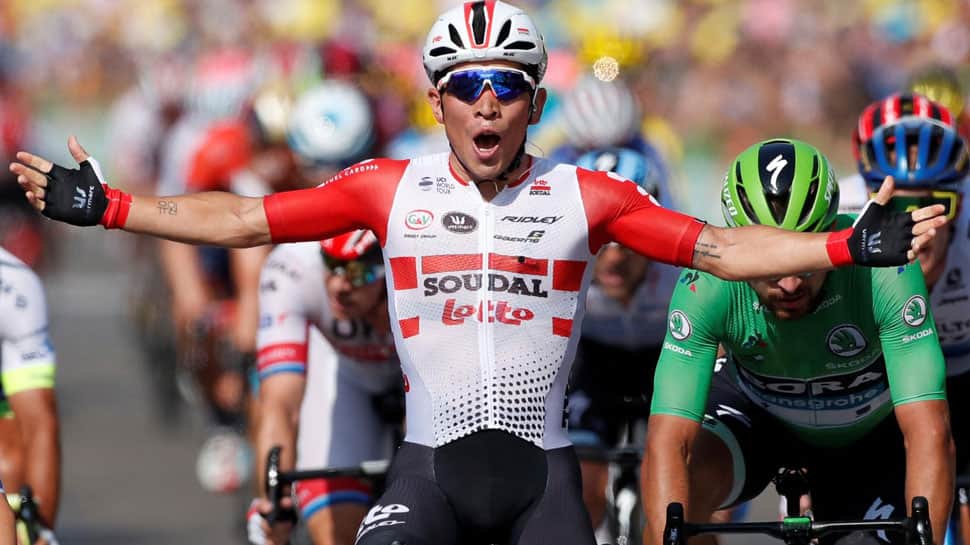 Australia`s Caleb Ewan claimed his second victory in this year`s Tour de France when he prevailed in a bunch sprint at the end of a crash-hit 16th stage on Tuesday.

Defending champion Geraint Thomas took yet another tumble but escaped unhurt to stay 1:35 behind the overall leader, Julian Alaphilippe of France.

"He`s ok, he fell on his left side. He was checked by the team doctor, it doesn`t seem to be serious," his Team Ineos sports director Nicolas Portal said.

Thomas was paced back into the bunch by teammates, with Dylan van Baarle receiving a warning for making a u-turn to return to his team leader.

Dane Jakob Fuglsang, who started the day ninth overall, crashed 28.5 km from the finish and abandoned the race.

One of the pre-race favourites after winning the Criterium du Dauphine last month, Fuglsang crashed out of the race for the second time in the last three editions.

Ewan, competing in his first Tour de France, is now the only sprint specialist with two wins this year, having already prevailed on the 11th stage in Toulouse last Wednesday.

"I knew if I kept persisting I would win and now I`ve got two wins," said Ewan.

As temperatures soared, three-times world champion Peter Sagan said the riders` association (CPA) did nothing to protect them after failing to trigger the `extreme weather protocol`.

"The CPA should do something to protect us, that`s why we pay them," said Sagan, who leads the points classification.

The International Cycling Union (UCI) regulations state that the protocol involves convening a meeting between stakeholders, including organisers, riders and teams, when extreme weather conditions are anticipated.

Tuesday`s stage was the sprinters` last chance to shine before Sunday`s final stage in Paris as the race now heads to the Alps. Wednesday`s 17th stage is a hilly 200-km ride from the Pont du Gard to Gap before the overall contenders battle it out for the title from Thursday to Saturday.

Athlete Christian Taylor to fly 5,000 miles to take one jump at US meet