U Mumba and Bengaluru Bulls secured their places in semi-finals by defeating Haryana Steelers and UP Yoddha respectively in the Eliminator 2 of the Pro Kabaddi League Season 7 in Ahmedabad on Monday. 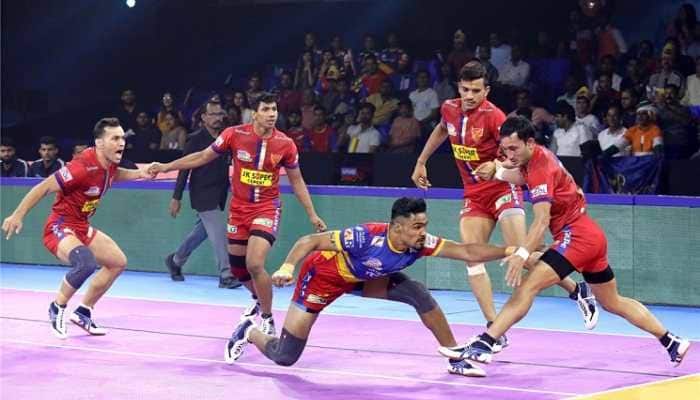 New Delhi: U Mumba and Bengaluru Bulls secured their places in semi-finals by defeating Haryana Steelers and UP Yoddha respectively in the Eliminator 2 of the Pro Kabaddi League Season 7 in Ahmedabad on Monday.

Haryana steelers tried hard but went down 38-46 against U Mumbai while Pawan Sehrawat led Bengaluru Bulls to victory against UP Yoddha 48-45.

Steelers bowed out of the tournament after playing exquisitely in the competition. They won 13 out of 23 matches with one game ending in a tie.

Prashanth Kumar Rai got Steelers off to a great start with a Super Raid in the 1st minute of the match. However, U Mumba scored a couple of raid points and levelled the match at 4-4 in the next minute.

Both sides kept picking up points in tandem before Vinay helped Steelers regain the lead through a fantastic raid in the 4th minute. Vinay and Vikash Kandola then recorded multiple raid points which helped the Steelers stay in the lead.

However, U Mumba scored a few crucial raid points and took four points in the last few minutes of the first half. The Steelers fought hard to stay in the contest, but U Mumba extended their lead after carrying out an All Out just before the half time whistle.

The UP side dominated the early minutes of a fiercely contested first-half as Bengaluru struggled to get a stranglehold. Bull's attack, heavily reliant on Pawan Sehrawat with Rohit Kumar starting on the bench, struggled against a well-organised Yoddha defence led by captain Nitesh Kumar.

Yoddha had defeated the Bulls both the times they met during the league stages and looked in complete control with Shrikant Jadhav impressing in the raids. Yoddha also had the advantage of momentum, with 23 All-Outs in their last 11 matches (the best record in the league), and inflicted an All-Out on the Bulls in the 8th minute to open up a 7-point lead.

Nitesh Kumar produced a stellar tackle in the first move after the All-Out to send Pawan Sehrawat to the dugout but the Bulls finally had success in the defence with a successful tackle on Surender Gill with seven minutes remaining in the half.

The tackle brought Pawan Sehrawat back on the mat and he produced a stunning 3-point Super Raid to halt Yoddha's dominance. Nitesh did produce a Super Tackle on Pawan with 4 minutes left in the first half but the Bulls, buoyed by Rohit Kumar's presence on the mat, secured their first All-Out with a minute remaining for the break. The half ended 20-17 with Yoddha on top.

Bulls dominated the starting minutes of the second half with Mahender Singh coming good in the defence. With the defence scoring points, the Bulls executed an All-Out and reduced Yoddha to two men on the mat.

But in Nitesh Kumar Yoddha arguably had the league's best defender, and the captain produced two Super Tackles (in the 10th and 11th minute of the half) on Pawan to keep his team in the match and pick up a High 5.

Bulls' Sumit and Yoddha's Shrikant impressed with their raids as the match entered the final four minutes with Yoddha leading by 8 points.