Mohan Kapur Sexual Harassment: The MeToo movement kicked off in India when actress Tanushree Dutta accused senior actor Nana Patekar of sexual harassment on the sets of their film.

New Delhi: Famous television and film actor Mohan Kapur, who recently hogged attention for playing Kamala Khan's father in Disney+ show, Ms Marvel has found himself in the middle of a MeToo controversy. Without revealing her identity, a girl has made some startling allegations against the actor claiming that he sexually harassed her when she was just 14-15 years of age.

In a long Twitter thread, she alleged that Mohan Kapur sent her his 'd**k' pictures and even confessed to being in love with her. The victim also alleged that the actor's then-partner knew about his behaviour. Check out the screenshots of the Twitter thread: 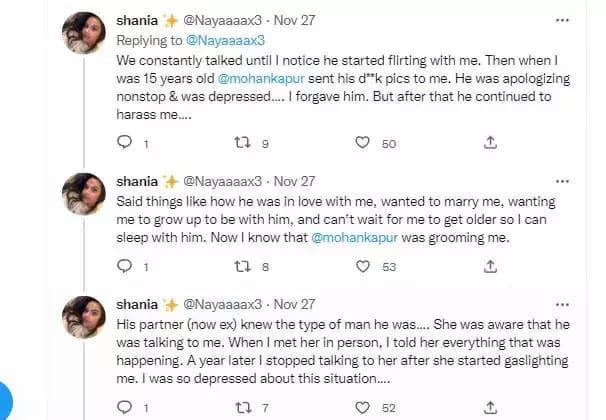 The MeToo movement kicked off in India when actress Tanushree Dutta accused senior actor Nana Patekar of sexual harassment on the sets of their film. However, Nana Patekar denied all the accusations. It sparked a huge row and many more celebrities were named and shamed in this campaign to call out sexual predators. From filmmaker Sajid Khan to Alok Nath - all were accused for sexual harassment.

Meanwhile, Mohan Kapur has not reacted to the controversy as of now.

The actor has also worked as a voice artist and has been dubbed for many Hollywood actors including Dwayne Johnson, Tom Hardy, Nicolas Cage, and Jackie Chan. He also voiced Doctor Strange in Hindi dubs of his various appearances throughout the Marvel Cinematic Universe.