Meanwhile, the couple is yet to announce the name of their son. On being asked about the same, he had said, "Not yet. Still thinking."

New Delhi: Actor Arjun Rampal, who recently became a father for the third time, shared a fresh picture with his newborn son in his Instagram stories. Sharing a glimpse of his newborn child from the day of his arrival in the world, he wrote, "Uffffffff........." with several heart emojis and his birth date, '18-July-2019'. Arjun is seen holding the little one's hand in the picture, who is wearing a cute little diaper.

The 'Ra.One' actor welcomed a son with his girlfriend Gabriella Demetriades on July 18, 2019 at Mumbai's Hinduja hospital.

Interestingly, Gabriella also shared the same picture on her Instagram story, with the same caption. 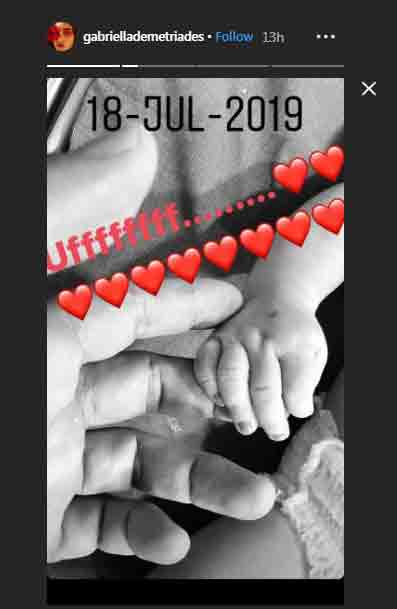 Meanwhile, the couple is yet to announce the name of their son. On being asked about the same, he had said, "Not yet. Still thinking."

The couple was spotted by shutterbugs with the baby on Sunday when they left the hospital for the home. Dressed in casuals, Arjun was seen holding the baby carrier in his hands and was all smiles for the cameras.

Gabriella was admitted to the hospital on Wednesday. Her parents, Arjun and his teenage daughters - Maahika and Myra too were spotted at the hospital when she delivered the child.

The actor had shared the news of his girlfriend's pregnancy in April this year on social media by posting a picture of her with a visible baby bump. He had captioned the photo as, "Blessed to have you and start all over again....thank you baby for this baby."

Arjun, who is known to be a doting dad, had earlier stated that it was crucial for him that his daughters accept Gabriella as part of their family.

On the work front, he was last seen in web-series 'The Final Call' in which he played an alcoholic pilot. He will next be seen in 'Nastik' that revolves around the journey of an inspector and how a little kid changes his perspective of life. The film is directed by Shailesh Varma and features Meera Chopra, Ravi Kisan, Divya Dutta and child artist Harshaali Malhotra.