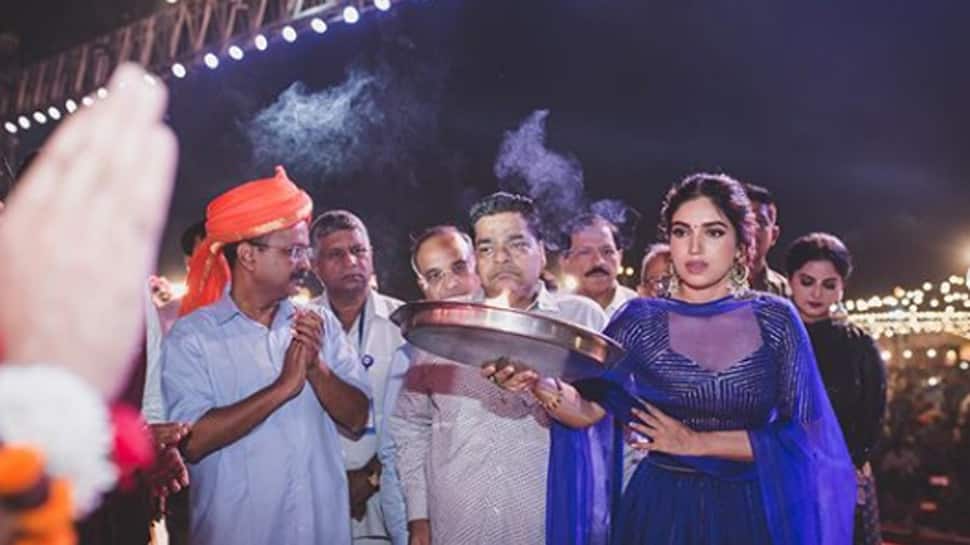 New Delhi: Dussehra, which marks the end of Ramlila and commemorates Lord Ram's victory over Ravana, was celebrated across India with fervour, and as every year organisers looked to rope in a smattering of Bollywood celebrities to add glitter to the festivities.

All through Wednesday, numerous pictures and videos did the rounds on the Internet, in which Bhumi is seen honouring the actors playing Lord Ram and Lakshman. She even performed Aarti at the venue.

Dressed in ethnic chic, Bhumi enthralled the crowd gathered at the Ramlila grounds. She was there as a promotional campaign for her upcoming Diwali release, "Saand Ki Aankh".

Sharing her experience of celebrating Vijayadashami at such grand level, Bhumi said: "It was an amazing moment. To be present there amongst so many people was an unforgettable experience. The festive spirit at the Lav Kush Ramlila is something that is a once in a lifetime experience. I am glad I could be a part of it."

Many other celebrities including actors Prateik Babbar and Siddhanth Kapoor were spotted attending Ramlila events in Delhi over the last week, when the whole nation was gripped in festive spirits.

Prateik and Siddhanth too visited Lav Kush Ramlila along with their film "Yaaram" co-stars Subha Rajput and Ishita Raj Sharma.

For Siddhanth, it was a "fairytale" experience.

"I always wanted to attend Ramlila and always wanted to be a part of it. So when I went to Ramlila in Delhi, it was a great experience. I also saw Avatar Gill sir there, he is a very hardworking actor and I have lots of respect for him. The whole crowd was so into the event and everything was done beautifully. It was like fairytale," he said.

"Bhabiji Ghar Par Hain!" fame actors Aasif Sheikh and Rohitash Gour were also in Delhi to experience the Ramleela in the city. They visited the Ramleela held at Shri Dharmik Ramlila Committe on October 5.

Aasif said that he was surprised to see the acting skills of the actors.

"Ramlila in Delhi is undoubtedly among the finest acts performed by actors who have a knack for art and talent. I am fond of watching theatre performances and Delhi's Ramlila has always been at the top of my list to visit. While I have seen several smaller performances, the one performed by Shri Dharmik Ramlila Commitee at Lal Quila was exquisite and an exceptionally splendid performance. The sheer talent these actors possess left me awed and I am grateful for all the love and excitement that they had in their eyes seeing us. Delhi waalon ne dil le liya," he added.

Nirbhay said performing live in front of such a huge crowd was "an incredible experience".

"This was the first time I witnessed Delhi's Ramlila live and also played an integral mythological character in one of the most popular Ramlilas of Delhi, the Lav Kush Ramlila. It was such an overwhelming feeling to see millions gathered to cheer for us actors. Although I have played several mythological characters, the experience of portraying it live to such an enthusiastic crowd, was truly an incredible experience.

"Meeting the Delhi Chief Minister (Arvind Kejriwal) at this event and hearing praises him was definitely the highlight of my trip. It was a larger than life feeling which I look forth to experiencing once again," Nirbhay said.