Arjun, who was busy shooting for Namaste England in Amritsar with Parineeti Chopra has apparently taken a break from his hectic schedule. 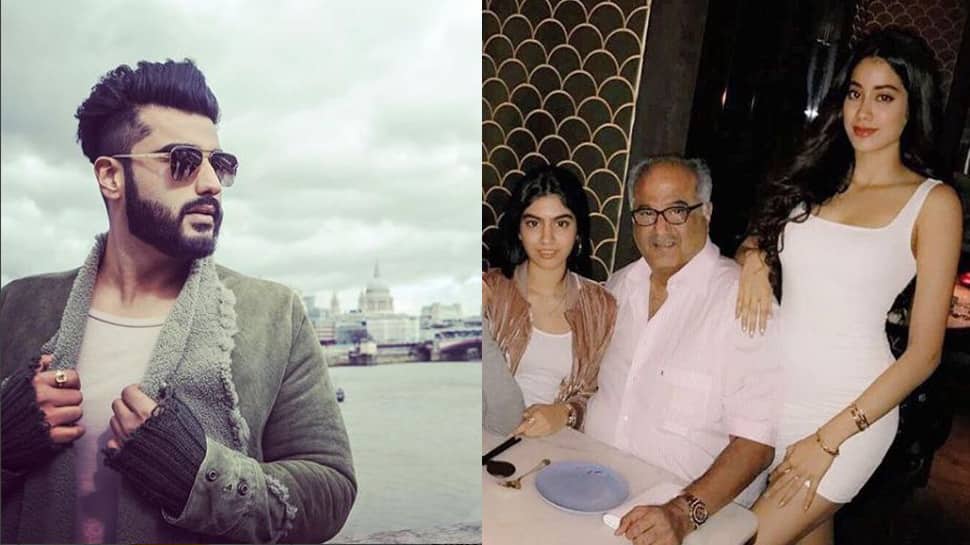 New Delhi: Producer and husband of late actress Sridevi, Boney Kapoor was spotted at Arjun Kapoor's residence along with his daughters Khushi and Janhvi on Friday.

Arjun, who was busy shooting for Namaste England in Amritsar with Parineeti Chopra has apparently taken a break from his hectic schedule. A Bollywoodlife report even stated that Arjun works for 18 hours a day to ensure that the film schedule is on track.

Arjun hosted a dinner for his family members after returning to Mumbai and Boney Kapoor along with his daughters Janhvi and Khushi were present. Mohit Marwah and his wife Antra Motiwala too were spotted leaving Arjun's residence later that evening.

It was earlier seen how Arjun stood like a pillar of strength for his father and sisters Janhvi and Khushi when Sridevi passed away. As per a BollywoodLife report, the actor had requested his producer, Vipul Shah, to give him a break of seven days after Sridevi’s sudden demise.

“Arjun had to take leave for about 7 days to be beside his dad and family. He had to ensure everyone was doing okay. Arjun knew that the entire production crew was waiting in Punjab for him and he had to finish off a week’s backlog as soon as he hits the sets. He spoke to Vipul and informed him that he will be doing 18-hour shifts to make up for lost time!” The actor is now back to acting and is fulfilling his commitments to his films. He is also making sure he spends enough time with his family," a source told BollywoodLife.

Sridevi passed away on February 24 due to accidental drowning in the bathtub of the hotel she was staying in Dubai. She was brought to Mumbai after three days and on the fourth day, after a formal condolence meet, Sridevi was cremated with state honours.

Sridevi's daughter Janhvi, who recently turned twenty-one, has resumed shooting for her Bollywood debut 'Dhadak'. The film is directed by Shashank Khaitan and has been produced under the banner of Karan Johar's Dharma Productions.

'Dhadak' is the Hindi remake of 2016 Marathi film 'Sairat'. The film also stars Ishan Khatter in a lead role. It is all set to hit the theatres on July 6, 2018.