Actress Disha Patani has rekindled Bollywood`s romance with the yellow sari through the "Slow motion" song from Salman Khan`s "Bharat". But it has left many asking "Where`s the sari?" 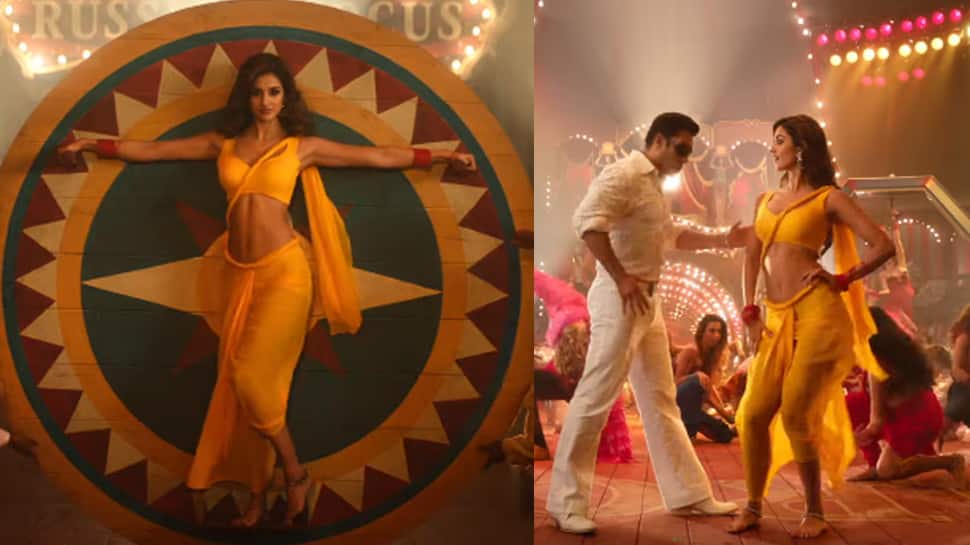 New Delhi: Actress Disha Patani has rekindled Bollywood`s romance with the yellow sari through the "Slow motion" song from Salman Khan`s "Bharat". But it has left many asking "Where`s the sari?"

In the video of the peppy number by Vishal and Shekhar featuring Nakash Aziz and Shreya Ghoshal, Disha is seen Matching her dance moves along with Salman.

But it is her sensual yellow sari with a `pallu` twisted like a rope and thrown over her shoulder, that has caught attention. The song garnered over 24 million views on YouTube in just 24 hours.

Award-winning textile designer Gaurang Shah feels the essence of the sari has got completely diluted.

"Well, everyone one has a choice to reinvent, but that doesn`t mean you do away with fundamental essence that made sari a beautiful attire for generations. It is a celebration of our cultural legacy and heritage. A sari is a sari. You must drape it in a manner that retains its magnificent character," Shah told IANS.

Designer Varija Bajaj called it a poor rendition in the name of reinventing ways to drape the six-yard wonder.

"Designers all across are working of reinventing the classic saris into sari gowns, lehenga saris, saris with jeans and some of them are extremely beautiful inventions," Bajaj told IANS.

"There is a very thin line between a beautiful innovation and a tragic disaster when it comes to designers reinventing a sari. A poor rendition not only looks distasteful, but also kills the very essence of feminism in a sari, and I guess that forms the majority chunk of such reinventions," she added.

"A sari is an unstitched garment and it is worn in different ways in different parts of the country. A sari can come in nine yards to three yards. There is no standardisation of a sari and there never has been," said Kumar, adding that there is no "traditional way or a hard and fast rule to wear a sari".

"It happens to be the most provocative and versatile garment in the world. It is somebody`s choice on how you want to wear it," she added.

Textile revivalist Madhu Jain feels there should be room for innovation, but the traditional way is here to stay.

"Saris have been reinvented for years now. However, while trends come and go, the traditional drapes will remain forever. And even there, each state has its own drape. Think of Gujarat`s seedha pallu sari, Maharashtra`s Nauvari drape, Bengal`s Athpourey style, Andhra Pradesh`s Kappulu drape, and so on," Jain told IANS.

For many, Disha`s avatar turned out to be a nostalgic trip to Raveena Tandon`s iconic look from 1990`s song "Tip tip barsa paani" or Madhuri Dixit`s "Dhak dhak" look. And for some, it became a joke with memes about the look going viral.

One user tweeted: "Look at that sari ka pallu covering Disha, (it) is (like) the syllabus I covered during the whole year."

Another posted: "This is the only sari which has naadaa instead of pallu."

There were memes showing Disha in the sari. One read: "If you ever feel useless, think of Disha`s pallu in this song."

In one image, a blurb pointing at Disha`s pallu reads: "Am I a joke to you?".

When 'Padman 'Akshay Kumar had a ''tie-faceoff'' with Iron Man