It seems that Bollywood's famous filmmaker and choreographer Farah Khan has been roped in to choreograph the famous 90s track 'Tip Tip Barsa Pani' in the upcoming film 'Sooryavanshi'.

Mumbai: It seems that Bollywood's famous filmmaker and choreographer Farah Khan has been roped in to choreograph the famous 90s track 'Tip Tip Barsa Pani' in the upcoming film 'Sooryavanshi'.

Katrina Kaif shared a behind-the-scenes picture with the choreographer whom she tagged as 'mummy'. "Me and mummmmyyyyy together after soooooooo long love u the bestest best," the 'Bharat' star captioned the picture. 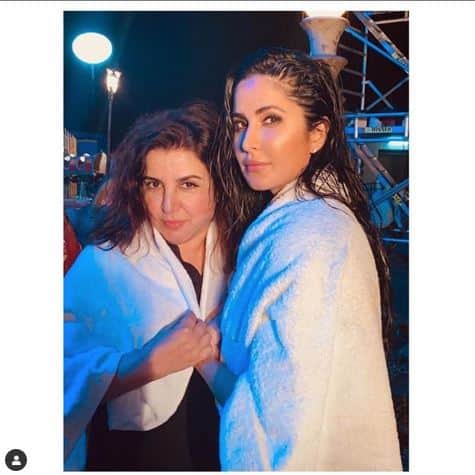 Farah in her quick response said, "My kat is the best! No nakhras n fully mad." 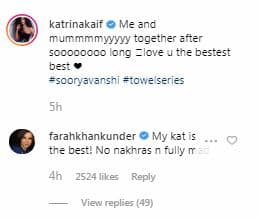 In the pictures, the duo was seen wrapped in towels.

On Tuesday, Katrina shared a monochrome picture with Akshay Kumar from the sets of the film which took social media by storm. In the click, the two actors were seen posing with their heads wrapped in towels. While the actors did not elaborate, fans were quick enough to react on the post.

While the second user wrote, "Tip tip barsa paani Katrina Kaif magic, so hot! Can't wait." A while ago, Bollywood's 'Khiladi' revealed that the 90s hit song featuring him alongside Raveena Tandon was synonymous with him and his career.

Thanking Ratan Jain, head honcho of Venus, who reportedly owns the right to the original number, Akshay tweeted, "I would`ve definitely been disappointed if any other actor would`ve recreated Tip Tip Barsa Paani, a song which has been synonymous with me & my career & I can`t thank Ratan Jain ji enough. At times like these you realize, we may have come a long way but we also go back a long way."

Earlier 'Sooryavanshi' was set to lock horns with Salman Khan starrer 'Inshallah' during Eid, but later to avoid any clash, the makers of action thriller changed the release date to March 27, 2020.
This is the first time that Akshay has collaborated with Rohit for a project.

After the success of `Simmba` and `Singham`, Rohit has expanded his cop universe with `Sooryavanshi`. In a teaser to the climax of `Simmba`, Akshay was revealed as entering as an Anti-Terror Squad chief.