Both Arti Singh and Kashmera Shah were seen in Bigg Boss 13. Kashmera had entered the show as her connection and supported her in the game.

NEW DELHI: Comedian-actor Krushna Abhishek recently bought a brand new luxury car and his sister and actress Arti Singh can't be happier. Arti Singh, who was seen in Bigg Boss 13, took to social media and dropped a couple of photos of herself with Krushna as they struck a pose before the four-wheeler. The actress heaped praises on his brother for the latest purchase and even mentioned how she cannot afford it now.

Sharing the photos on Instagram, Arti wrote, "So so proud of you. Well I hv never been into cars but this was my dream car . I can’t afford it right now but u bought it and made my dream come true .. and u deserve every bit coz u work so so hard .. proud sister, @krushna30."

Arti again showered her brother with love on his this comment and left several heart emojis. Meanwhile, Krushna’s wife ad actress Kashmera Shah also took to the comment section and wrote, "it's mine too." To this, Arti assured her, "@kashmera1 obvvvvvvvvioouslyyy u are his lucky charm." 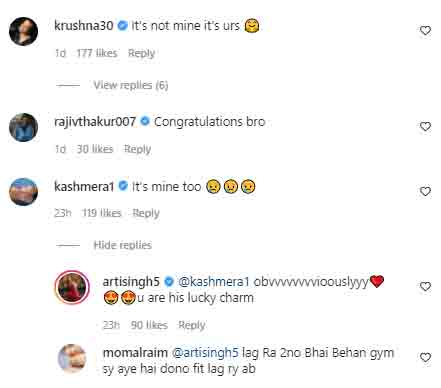 Both Arti Singh and Kashmera Shah were seen in Bigg Boss 13. Kashmera had entered the show as her connection and supported her in the game. Kashmera was recently seen as a guest on Bigg Boss 15 and made headlines after she blasted contender Karan Kundrra for not showing support to his girlfriend Tejasswi Prakash in the house.

Abhishek and Arti Singh are neice and nephew of yesteryear superstar Govinda. Krushna and Govinda's rift has been out in the public for years now. In fact, Govinda's wfe Sunita had also vowed in public that this feud will never end.