His personality, forthrightness and views reflected the Banaras that could be seen in the writings of Kabir and his guru, Dwivedi. 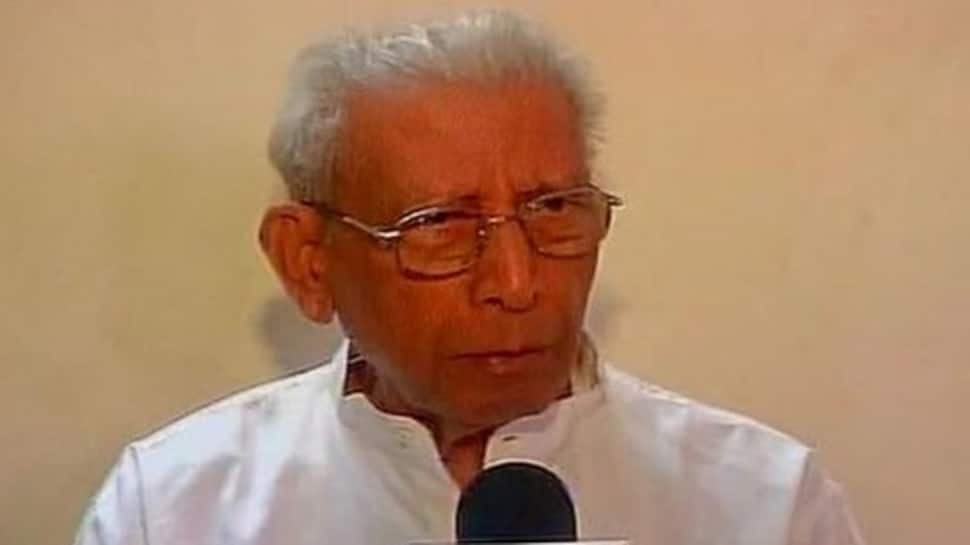 New Delhi: Namvar Singh was like a giant banyan tree in Hindi literature, who nurtured many writers and poets under him.

Singh, who died on Tuesday night after a month-long illness at the age of 92, showed to the world that a dry topic like literary criticism can be made simple and interesting.

He may have started his journey as a poet but the seeds of literary criticism were sown deep by his mentor Acharya Hajariprasad Dwivedi. It was only natural that Singh would follow in his footsteps.

Through "Dusri Parampara ki Khoj" (In Search of a Second Tradition), he not only redefined criticism on modern parameters but also took it forward, beyond the era of Ramchandra Shukla.

His personality, forthrightness and views reflected the Banaras that could be seen in the writings of Kabir and his guru, Dwivedi.

Born on July 28, 1926 in Varanasi's village Jiyanpur (now in Chandauli), Singh spent most of his creative years in Delhi but he never felt at home.

It was in 1941 that Singh started his writing career as a poet and published his first poem in "Khastriyamitra" magazine.

Singh completed his MA and PhD in Hindi literature from the Banaras Hindu University. He also worked as a professor in his alma mater BHU as well as Jodhpur university and the Jawaharlal Nehru University (JNU).

Senior critic Manager Pandey said Singh was not only popular as a critic but also as a teacher and orator. He contemporized Hindi literary criticism.

According to Pandey, Singh easily connected with young writers and would always be surrounded with books and literature. Singh used to say that life would be unimaginable for him without his pen and books.

He briefly toyed with politics and contested the Lok Sabha election from Chakiya (Chandauli) in 1959 on a ticket from the Communist Party of India. He lost both his election and his teaching job.

It was a period full of struggle for Singh, his younger brother, writer Kashinath Singh, recalled in a book. But it was also time that helped his forge a deeper connection with literature and books.

Singh then lived in a house near Lolark Kund in Varanasi, memories of which stayed with him forever.

After losing his job in Banaras Hindu University, Singh worked in Sagar University as assistant professor for a year.

From 1960 to 1965, he stayed in Varanasi to focus on his writings but moved to Delhi to work as the editor of "Janyug" magazine. He was also the literary consultant for Rajkamal Prakashan for two years during this period.

In 1967, he edited a quarterly magazine "Alochana". But in 1970, he returned to his academic career as the dean of Hindi department in Jodhpur University.

He was awarded the Sahitya Academy honour for his book "Kavita Ke Naye Pratimaan" in 1971.

Singh joined Jawaharlal Nehru University as a professor in 1974 and retired from there after 13 years in 1987 but his term was extended for five years.

According to Jagdishwar Chaturvedi, a former Hindi professor in the University of Calcutta, Singh was a great mentor and teacher who took young writers seriously and constantly encouraged their writings. He kept in touch with emerging writers till the very end of his life.

Sharing an interesting anecdote about Singh's love for books, Chaturvedi said Singh had once talked about a book by Marxist critic Parajneshwar Verma. He searched for the book in the market but could not find it. He spoke to a publisher who brought it to a book fair for him.

Singh also went to the same stall and enquired about the book. When he got to know that a JNU student had bought it, he returned and borrowed the book from him to read. He returned it after two days.

Chaturvedi, who had penned a book about Singh, said the author had once told him that he wanted his last rites to be done as per Hindu rituals. He cited that even Karl Marx was buried as per Christian rituals.

In accordance with his wishes, Singh was cremated on Wednesday as per Hindu rituals.

He may have been a communist and considered himself to be an atheist but would visit temples as he felt they were a part of the culture.

According to his student Purushottam Agarwal, Singh was a critic who established his identity beyond the Hindi language. Agarwal said Singh always read the works of students and young writers and would encourage them as equals.