The picture of Alia with Karan Johar's children Yash and Roohi is winning hearts all over the internet.

New Delhi: Actress Alia Bhatt performed her duty as a sister and tied rakhi to Karan Johar's little munchkin Yash on the occasion of Rakshabandhan. She later took to Instagram to share glimpses from the celebrations and little did anyone know that the pictures would go crazily viral on social media, receiving thousands of likes and comments from fans.

The pictures, which show Alia tying rakhi on Yash's wrist, have been driving the internet crazy. Alia, who is seen dressed in a traditional attire, which she paired with silver jhumkas and her priceless smile, is seen tying the rakhi to Yash. Both Yash and Roohi can be seen twinning in a red tee with 'sister' and 'brother' imprinted respectively.

Notably, it has also received attention from veteran actress Neetu Kapoor, who is very fond of the 'Raazi' actress and has often expressed the same many times. She commented on Alia's post with a heart emoji. Aww! Now, that is really cute. 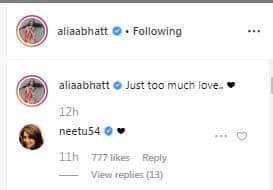 The picture was re-shared by Karan Johar's Dharma Productions on its official Instagram account and it has been flooded with some adorable comments. Take a look: 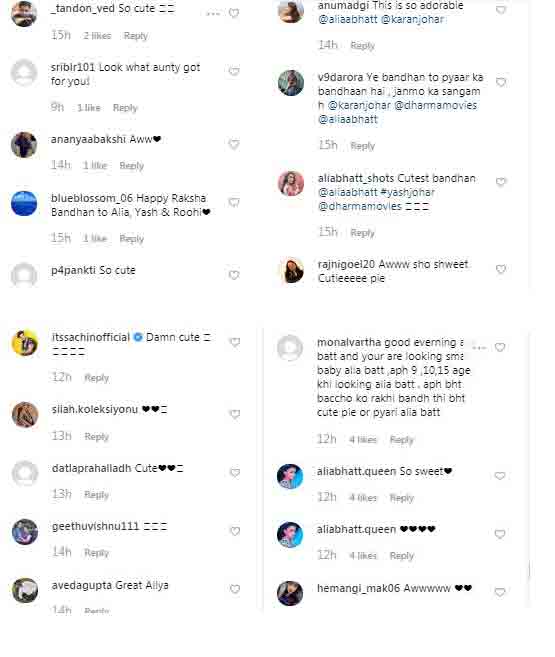 Even last year, Alia had celebrated the Raksha Bandhan with KJo's children - Yash and Roohi. She had shared a picture from the occasion on her Instagram, writing, "My beautiful baby brother! Aaah just look at that face." Take a look at her post."

On the professional front, Alia has been shooting for Mahesh Bhatt's 'Sadak 2' also starring Sanjay Dutt and Aditya Roy Kapur. She also has 'Takht' and 'Brahmastra' and south project 'RRR' lined up.