Taking to Twitter, the ‘Coolie No. 1’ actor wrote: "The last few days me and natasha have received so much love and positivity from everyone so just wanted to thank everyone from the bottom of my heart.” He also shared an unseen picture on social media. 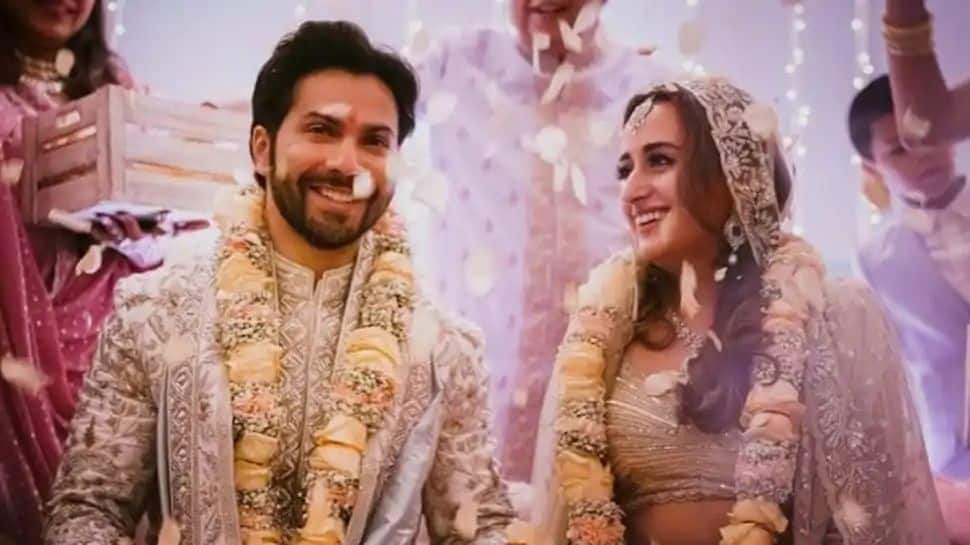 New Delhi: Bollywood actor Varun Dhawan married his ladylove Natasha Dalal in an intimate ceremony on January 24, 2021 at Alibaug. Newlywed Varun took to his social media to thank people for showering him and his wife with all the love and blessings.

Taking to Twitter, the ‘Coolie No. 1’ actor wrote: "The last few days me and natasha have received so much love and positivity from everyone so just wanted to thank everyone from the bottom of my heart.”

Sharing a picture from his wedding day with Natasha and the Shaadi Squad, his wedding planners, Varun also expressed gratitude to them.

Varun and Natasha got married in the presence of their family and close friends at The Mansion House resort in Alibaug, Maharashtra. Karan Johar, Manish Malhotra, Zoa Morani and Kunal Kohli were among those who attended the wedding.

Posting a picture with the groom, Karan, who directed Varun in ‘Student of the Year’, penned a heartfelt note for the couple on January 25. The filmmaker wrote, “I am filled with a multitude of emotions and memories as I write this post! I still remember meeting this kid in goa! Long hair, big dreams in his eyes and a swag that was waiting to explode on celluloid! A few years later he was was my Assistant on MNIK! I silently observed his determined sincerity and also how hilarious he can be ...sometimes even unintentionally! When he faced the camera for me for the first time I developed an immediately protective feeling of love and care for him..: almost assuming the role of a parent.... that feeling today came alive in abundance as I saw him walk with his loved one around the holy fire of trust and commitment... my boy is all grown up and ready for this beautiful phase in his life... congratulations my darling Natasha and Varun! My blessings and love forever ....love you.”

On the work front, Varun was last seen in his father David Dhawan’s ‘Coolie No. 1’, opposite Sara Ali Khan. He also has ‘Jug Jugg Jeeyo’ and Shashank Khaitan’s ‘Rannbhoomi’ in the pipeline.

I have done it all on my own, and never asked my father to call anyone: Luv Sinha