Met Gala is extremely special for both Priyanka and Nick as they made their first public appearance together at the event in 2017. 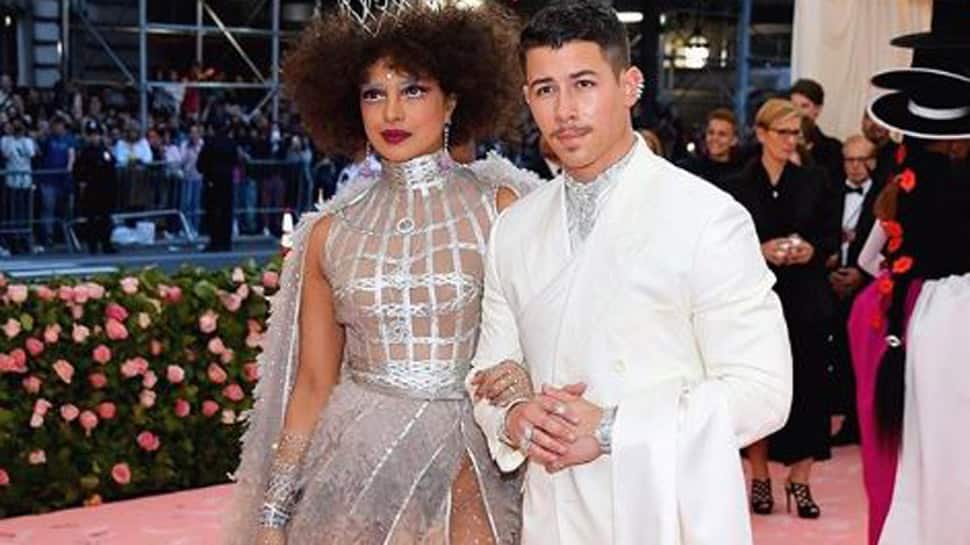 New Delhi: The most coveted event of 2019,  Met Gala 2019 took place in the Metropolitan Museum of Art's Costume Institute, New York. The who's who of Hollywood made it to the 'pink carpet' but we had our eyes only for 'desi' girl Priyanka Chopra and her husband Nick Jonas.

Dressed in an haute couture dress from Dior, Priyanka was pretty much in sync with this year's Camp theme while Nick thoroughly complimented his darling wife in an-white suit from Dior Men and paired them with a blingy pair of shoes. However, it wasn't PeeCee's sheer dress that caught everyone's attention but her quirky hairdo. The actress donned a towering crown that had everyone talking.

The pictures and videos from the event have gone viral on social media. Have a look!

Met Gala is extremely special for both Priyanka and Nick as they made their first public appearance together at the event in 2017.

A few hours before the Met Gala 2019, a nostalgic Priyanka shared a few snaps on her Instagram along with a very interesting caption. “The story I’ll definitely tell our future kids… How I MET your father,” she wrote.

Priyanka and Nick weren't dating when the posed together at the event. “We were both wearing Ralph Lauren! And we decided to go together because it was fun.We were at the same table. We know each other so we were like, ‘Hey you know what, let’s go together.’ And I was like, ‘Okay. Let’s go together!’ It just ended up working out,” PeeCee said on Jimmy Kimmel's chat show.

On the work front, Priyanka has finished shooting for "The Sky is Pink", directed by Shonali Bose. She has also announced an India-set wedding comedy in which she will collaborate with writer-actor Mindy Kaling.

Met Gala 2019: Everything you need to know about the 'Camp' fashion theme