The 'Sasural Simar Ka' actor Shoaib Ibrahim recently shut down a troll who insulted his wife Dipika Kakar during an 'Ask Me Anything' session on Instagram and called her 'irritating'.

New Delhi: TV actor Shoaib Ibrahim of 'Sasural Simar Ka' fame recently shut down a troll who insulted his wife Dipika Kakar during an 'Ask Me Anything' session and called her 'irritating'.

On Saturday (June 19), the actor had decided to interact with his fans and asked them to throw questions at him on Instagram. Things got a little awkward when one user wrote, "Why dipika shouts so much?? Isnt that irritating??".

To this, Ibrahim replied saying, "Irritating shayad aapke liye hoga but not for me not for my family and not for the people who know what we are. Its ok sabki apni apni pasand hai. Mere Liye, Meri family ke liye aur unke liye jo use chahte hai (her fans and well wisher) unke liye anmol hai wo. Baaki ke log kya sochte I don't care. (Maybe it's irritating for you but not for me. It's ok, everyone has their preferences. For me, for my family and for her well wishers, she's special. I don't care what other people think).

Check out their interaction: 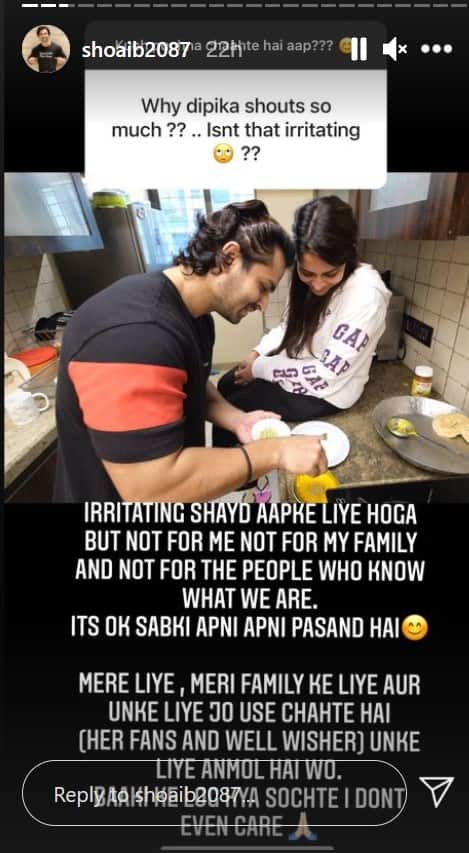 Dipika Kakar and her husband Shoaib Ibrahim are popular TV stars, who fell in love on the sets of  'Sasural Simar Ka'. They both headlined the show. However, Shoaib quit the show soon while Dipika played the lead for several years. They continued to remain friends and eventually developed feelings for each other. The couple dated for several years before getting married in February 2018.

Dipika and Shoaib look perfect together and are currently living in Mumbai. They have a massive fan-following and are quite popular on social media too.