The funeral is scheduled to be held on Saturday, sources close to SPB's family said. From youngsters to senior citizens, people lined up on sides of the highway towards Thiruvallur district at several spots including at the Red Hills junction to pay their last respects. 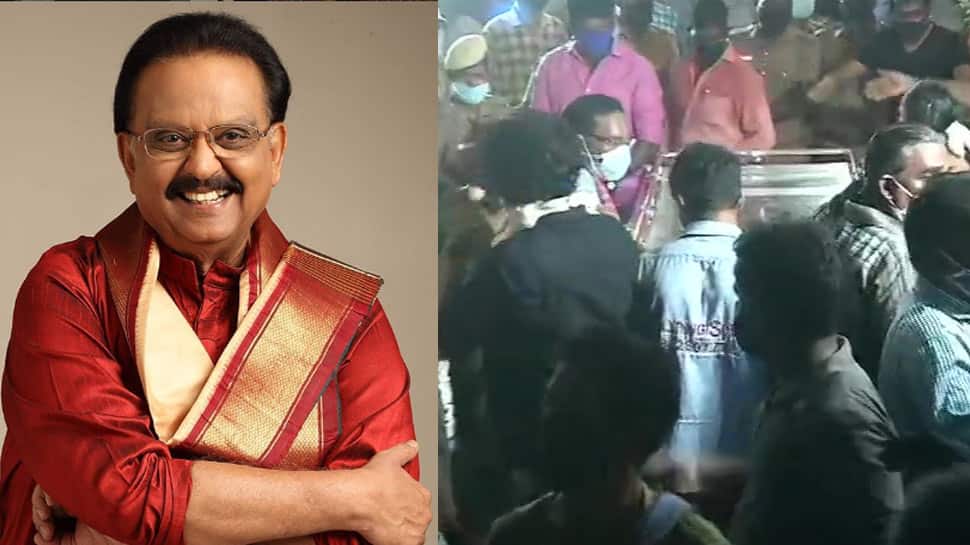 As a mark of respect to Balasubrahmanyam, who has "earned a perpetual place in the hearts of people" not only from Tamil Nadu but across the country, the singer "would be laid to rest" with honours from the police department, the Chief Minister announced in an official release.

Balasubrahmanyam's body was taken from his Nungambakkam residence in the city to his Thamaraipakkam farm house in neighbouring Thiruvallur district, about 45 km from here with scores of fans and well-wishers following the hearse van -decorated with flowers and a 'trishul' atopthe vehicle- in two-wheelers and cars.

The funeral is scheduled to be held on Saturday, sources close to SPB's family said.

From youngsters to senior citizens, people lined up on sides of the highway towards Thiruvallur district at several spots including at the Red Hills junction to pay their last respects.

Several men stood on the road medians to shower flower petals on the van carrying the singer's body.

The van had to be slowed down or halted to allow people to pay their last respects at a number of locations.

Despite restrictions due to the coronavirus pandemic, SPB's residence here saw an unceasing crowd of fans, well-wishers and political personalities including DMK youth wing leader Udhayanidhi Stalin, son of the Dravidian party chief M K Stalin to honour the singer.

Police had a tough time controlling the crowd of fans who had gathered to pay their last respects.

Iconic music composer and a close friend of SPB for over 50 years, Illaiyaraja mourned the singer's death in a moving video post.

The acclaimed musician said he had no words to describe the irreparable loss and added,"Balu, I told you to come back.

You did not listen and have gone..Have you gone to sing for the Gandharvas? (forms of life higher than humans according to ancient Hindu belief), the world has become a Sunyam (emptiness) with your passing.

I have no words to describe the loss..There is a limit for all grief but not for this."

SPB's another long time associate and veteran Tamil filmmaker Bharathiraja said he has no words to describe the loss of a close friend for over 50 years.

"I am in grief.I cannot talk.I have no words," he said.

Social media was abuzz with messages of condolences and several users including actress Khusbu Sundar changed their display pictures and posted images of the singer as a mark of respect while renowned music composer A R Rahman posted a video, "voice of victory, love devotion and joy," honouring SPB on his twitter handle.

The legendary playback singer died on Friday after fighting COVID-19 at MGM Healthcare here since August 5.