Sunidhi Chauhan, Nucleya and others to perform at Waves BITS Pilani Goa's Annual show; deets inside

Embrace yourself for an immersive experience, get ready to Unravel the Labyrinth in BITS Goa this November from the 18th to 20th.

New Delhi: Waves, BITS Pilani Goa’s Annual Cultural Extravaganza is back for the first offline edition since 2019! Embrace yourself for an immersive experience, get ready to Unravel the Labyrinth in BITS Goa this November from the 18th to the 20th. Sticking true to its theme, Waves ‘22 brings an exciting fest that will take you on an adventure and bring you truly novel experiences. 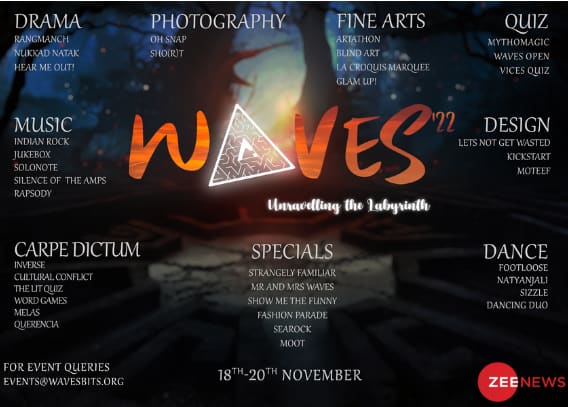 The inauguration happened on the 17th when all the performing clubs mesmerise us with their performances. It will include performances by the Music Society, film making club, Kala, Synchronise, Mime club, and Dance club. An exceptional dance performance will be performed by The kids of Abhigyaan, a volunteer organisation that helps underprivileged students.

Get ready to live nights like never before with their spectacular line-up this year! For the EDM Night on the 18th, India’s top-performing DJ, Nucleya, will take the stage. Prepare to let loose and headbang your night away as you lose your mind in a cacophony of some of the best music you’ve heard.

Following that, gear up for the time of your life to witness Sunidhi Chauhan live. Enjoy perhaps the truest form of expression in all of us as you let the soul of Bollywood permeate through you this November 19th.Immerse yourself in rock, starting with The Searock finals scheduled on the 20th, as top and upcoming bands, being through vigorous elimination rounds, battle it out for India’s most coveted semi-professional band prize.

Ending on a high, following the Searock finals, we have the Indie night, on which some of India’s top bands like the Local Train, Indian Ocean and Parikrama have taken the stage previously. In addition to the nights and the star-studded lineups, we have MTV Hustle on the 18th, India’s first rap/hip-hop reality show where the country’s top rappers battle it out to become India’s biggest hip-hop star, bringing their biggest performers to fire up the fest and a FilterCopy Conclave bringing in some of their biggest stars, also engaging themselves in judging Strangely Familiar and Mr. and Miss Waves, some of the fest’s biggest events.