Sushmita Sen gets trolled for sharing a joke on weddings, posts a kickass reply

The actress got trolled for her latest post on marriage.

New Delhi: Bollywood actress and former Miss Universe Sushmita Sen has been in limelight owing to her whirlwind romance with model Rohman Shawl. Things seem to be getting serious between the two and her fans love watching them together.

However, on Wednesday, Sushmita got badly trolled by a section after she shared a joke about weddings on her Instagram account. The actress shared a quote on weddings in jest and surprisingly, it didn't go down well with some users as they left some harsh comments on her post.

Sushmita's quote on marriage read, "Whoever invented marriage was creepy as hell. Like I love you so much I'm gonna get the government involved so you can't leave."

And while the post was shared as an amusement by the actress, the reactions were a bit depressing. Take a look: 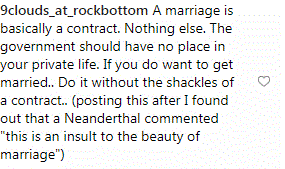 However, the former Miss Universe, who is a beauty with a brain, came up with a kickass reply as she shared another post instantly, giving a perfect reply to the haters. Her caption read, "Moral of the story...’ A #joke can lead to detention’ #guilty of a #senseofhumor #lol I love you guys!!!!."

Sushmita is a single parent to daughters - Renee (18) and Alisah (8). She is currently in a relationship with model Rohman Shawl.