An old video of Bollywood actress Sara Ali Khan receiving her graduation degree from her school before heading to Columbia University is going viral on social media. The video features her parents Saif Ali Khan and Amrita Singh together. 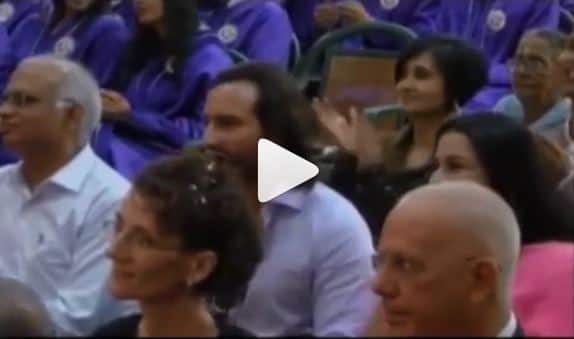 New Delhi: An old video of Bollywood actress Sara Ali Khan receiving her graduation degree from her school before heading to Columbia University is going viral on social media. The video features her parents Saif Ali Khan and Amrita Singh together.

Sara completed her schooling from Mumbai's Dhirubhai Ambani International School in 2013 before she went to the coveted Columbia University to complete her graduation in History and International Relations.

In the video that has surfaced online, a chubby Sara can be seen collecting her degree from Aamir Khan and Nita Ambani. She gleefully waves at her parents Saif and Amrita, who are seen rooting for their daughter. Check out the video

Sara on Koffee With Karan revealed the time when she dined with both her parents together. "It was nice. I was going to college and mom had come to drop me and Abba was also there. Actually, my father and I were having dinner and then we decided to call my mum, and she came."

"We had a good time. And then they set me up in college together, I remember. And it was actually quite a sight because you were seeing, you know, Amrita Singh, and for those of you who know her, it's a funny sight, like, making my bed and Saif Ali Khan putting the bulb in the lamp. It was really nice and I really cherish that," Sara added.