Dilip Kumar was born on December 11, 1922, at his ancestral home in Qissa Khawani Bazaar area of Peshawar in Khyber Pakhtunkhwa province. His original name was Yousuf Khan. 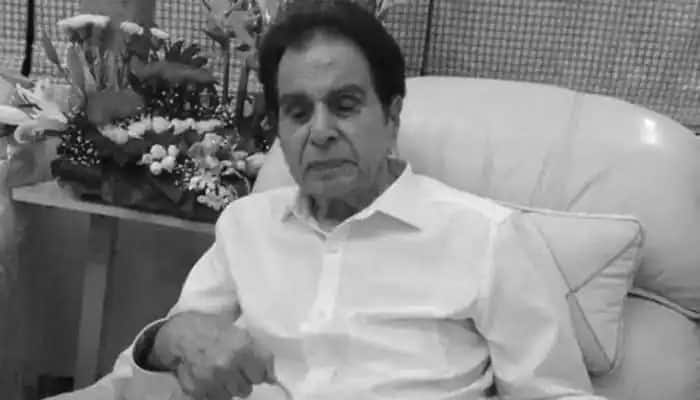 Peshawar: Pakistan on Wednesday showed its adulation for legendary Indian actor Dilip Kumar as tributes poured in from across the country for the 98-year-old cinema icon who was born here.

Dilip Kumar was born on December 11, 1922, at his ancestral home in Qissa Khawani Bazaar area of Peshawar in Khyber Pakhtunkhwa province. His original name was Yousuf Khan.

In a tweet, Pakistan President Arif Alvi said Kumar was "an outstanding actor, a humble man, and a dignified personality".

"Sorry to see Dilip Kumar (Yusuf Khan) depart from his worldly abode. An outstanding actor, a humble man, and a dignified personality. Condolences to the immediate family and his huge family of admirers. May his soul rest in peace," he tweeted.

Kumar, India's enduring film legend through the decades, died at a Mumbai hospital on Wednesday after prolonged illness.

Condoling Kumar's death, Prime Minister Imran Khan said he can never forget his generosity in helping to raise funds for a trust to set up cancer hospitals in his mother's memory.

"Saddened to learn of Dilip Kumar's passing. I can never forget his generosity in giving his time to help raise funds for SKMTH when (the) project launched. This is the most difficult time - to raise (the) first 10% of the funds & his appearance in Pak & London helped raise huge amounts," Khan tweeted.

"Apart from this, for my generation Dilip Kumar was the greatest and most versatile actor," he said.

"He ruled hearts and minds across generations and leaves behind a rich legacy of work," the minister tweeted.

He was a promising artist who cannot be replaced, the minister said, adding that in his encounters with Kumar, he found the actor "a charming personality".

The Opposition party Pakistani Muslim League (Nawaz) president Shahbaz Sharif in his tribute said Peshawar's Khan reigned for many years in Bollywood as Dilip Kumar and today, left the world in the form of a legend.

Terming his demise "a great loss", PML-N spokesperson Marriyum Aurangzeb said the characters essayed by Kumar and the dialogues he delivered with such passion became quite popular with the masses.

The Khyber-Pakhtunkhwa (KP) government condoled the demise of the legendary actor, saying he will always be remembered for the love and affection he had for the people of his ancestral home town in the province.

In his condolence message, KP Chief Minister Mahmood Khan said a golden chapter of the Indian film industry has been closed with the death of Kumar.

However, he would remain alive in the hearts of fans. His services and achievements in the field of acting would be remembered for a long time, Khan said.

In a statement, Kamran Bangash, the Special Assistant on Information to Chief Minister of Khyber Pakhtunkhwa, expressed profound grief and sorrow over the demise of the film legend.

The KP government spokesman said he was saddened to know about the death of Kumar, a resident of Peshawar who earned fame in acting.

The Pakistan government has already declared his native house as a national heritage and completed all formalities to convert it into a museum in his name.

Kumar visited Peshawar in the early 90's. He was given an unprecedented reception and welcome by the people of Peshawar.

He said the Council will arrange a memorial function in honour of the great actor and ?Farzand e Peshawar (son of Peshawar)'.

The Directorate of Archaeology and Museums, Khyber Pakhtunkhwa, in a banner offered "special condolences to his bereaved family".

Common people in Peshawar also paid their tributes to the legendary actor.

"We lost a great man. The people of Peshawar will always remember him and his services," he said.

Majeed Lala, who also owned a shop, said he was shocked on hearing about Kumar's death.

Peshawar's leading businessman and ruling Pakistan Tehreek-e-Insaf (PTI) Senator Mohsin Aziz in a statement said Kumar was his uncle in relation and the entire Peshawar city is in a state of mourning due to his demise.

Aziz said Kumar left Peshawar in 1935 at the age of 13 for Mumbai and excelled himself in the field of acting.

Dilip Kumar attained the distinction of 'Shahenshah-e-Jazbaat' (the king of emotion), he noted.

Kumar, known to generations of film-goers as 'tragedy king' for his portrayal of the brooding, intense romantic in classics such as 'Mughal-e-Azam' and 'Devdas', had been admitted to Mumbai's Hinduja Hospital, a non-COVID-19 facility in Khar, since last Tuesday.

Often known as the Nehruvian hero, he did his first film 'Jwar Bhata' in 1944 and his last 'Qila' in 1998, 54 years later. The five-decade career included 'Mughal-e-Azam', 'Devdas', 'Naya Daur', and 'Ram Aur Shyam', and later, as he graduated to character roles, 'Shakti' and 'Karma'.

The actor is survived by his wife Saira Banu.