Tax Audit Due Date Extension for AY2022-23 Latest News: The CBDT has extended the due date by a week.

It took taxpayers thousands of tweets and numerous complaints with screenshots on Twitter to get an extension of seven days for filing their tax audits. Twitter was flooded with complaints reporting technical errors and people demanding an extension of the due date which resulted in the trending hashtag #Extend_Due_Date_Immediately. The tax department finally bowed down to the demand and extended the due date for filing tax audit reports for fiscal 2021-22 by 7 days till October 7 in a late-night notification.

"On consideration of difficulties faced by the taxpayers and other stakeholders in electronic filing of various reports of audit under the provisions of the Income Tax Act, 1961 (Act), the Central Board of Direct Taxes (CBDT), in the exercise of its powers under Section 119 of the Act, extends the due date of furnishing of the report of audit under any provision of the Act for the previous Year 2021-22, which was 30th September 2022 in the case of assessees referred in clause (A) of Explanation 2 to sub-section (1) of section 139 of the Act, to 7th October 2022," said the CBDT in a statement.

In a tweet, the income tax department said, "CBDT extends the due date for filing of various reports of audit for Assessment Year 2022-23 from 30th September 2022 to 7th October 2022 for certain categories of assessees." 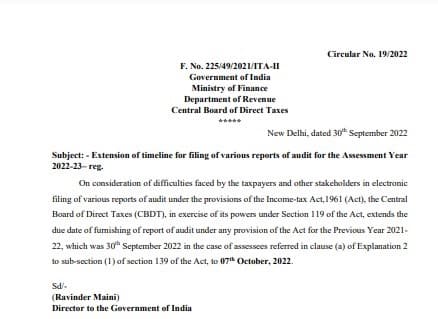 Under the income tax act, those taxpayers who need to get their accounts audited by a chartered accountant are required to file the tax audit report with the I-T department by September 30.