While on vacation in Fiji, he took his lady love to a private island nearby, got down on one knee and proposed her with an oval cut Lorraine Schwartz sparkler, which he kept hidden in his drone. 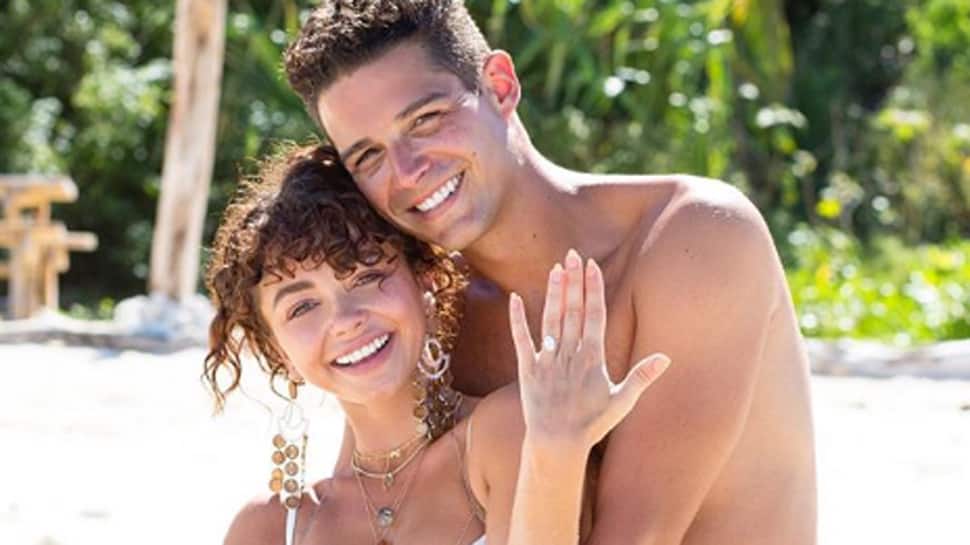 Washington: Former 'Bachelor in Paradise' star Well Adams recently opened up about his proposal to actor Sarah Hyland and why he felt "too much pressure" before popping the big question. The pair, who dated for nearly two years, announced their engagement on Tuesday night and are now relishing their new titles.

"She said yes, which was surprising, I think, to everyone involved. Real touch and go there," Wells joked on his podcast Your Favourite Things with co-host Brandi Cyrus, reported E! News. Adams also confessed he knew Hyland suspected that he had something big planned, even after he attempted to "throw her off a little bit."

"I think she thought it was happening and then right before we left, I was dressed pretty frumpy. I was like, `Is this t-shirt OK?` And she was like, `You`re wearing a t-shirt?` That threw her off a little bit. Listen, Sarah`s a smart girl. She knew what was happening," he recalled.

While on vacation in Fiji, he took his lady love to a private island nearby, got down on one knee and proposed her with an oval cut Lorraine Schwartz sparkler, which he kept hidden in his drone. Also hidden was a photographer, ready to capture the romantic moment.

"All of a sudden he f--king scurries out from the bushes and he`s like, `Snap, snap, snap, snap, snap!` Sarah is like, `What is happening!? Then all of a sudden we were in a cool engagement shoot," Adams said.And as usual, the most nerve-wracking part was simply getting the unique yet stunning ring for his bride-to-be. "Guys, for the most part, are not used to having expensive pieces of jewellery around them. So, it freaks us out just in general. Also, for me, we were travelling across the ocean, so that`s even more stress of like, what happens if someone steals my bag or something," Adams said.

The star stated that he felt relieved after not being in charge of the very "nice ring.""Everyone is like, `Are you so happy?` And I was so happy but I`m also so happy I`m not in charge of that very nice ring. There`s too much pressure," he added. However, they are not feeling any pressure to tie the knot just yet.

"We haven't figured out anything. Phase 1 was just, like, get engaged. We`re still in Phase 1," Adams told Brandi. The pair began dating in November 2017 after meeting through social media and moved in together last year.