The creature's large head was covered by a shield-like carapace whose shape reminded the scientists of the Millennium Falcon spaceship of 'Star Wars' fame. 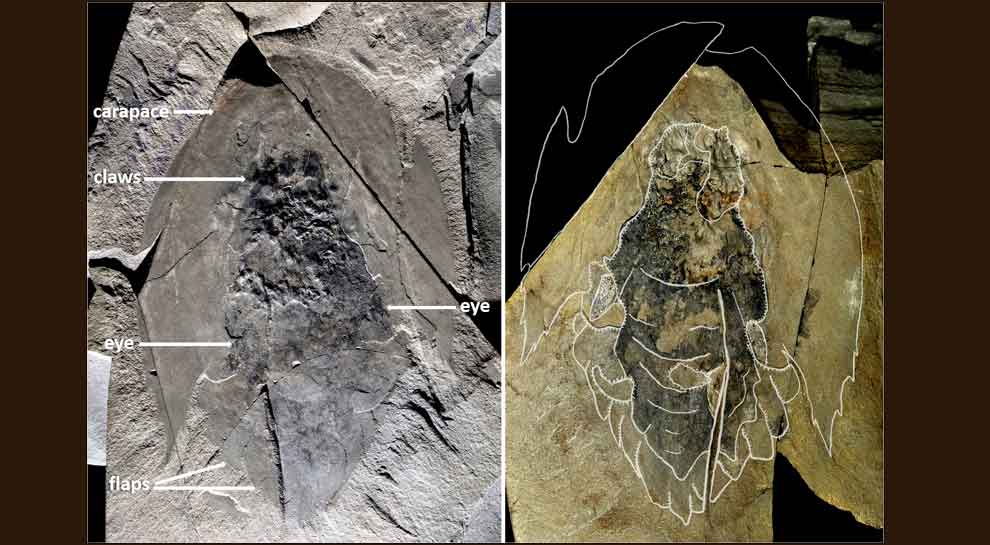 Handout photo of a complete fossil unearthed in Kootenay National Park in the Canadian Rockies of the marine creature Cambroraster falcatus (Reuters photo)
Share:
Edited By:

WASHINGTON: Hundreds of fossils of a primordial sea creature with rake-like claws and a head resembling a famous fictional spaceship have been unearthed in Canada, providing a wealth of information about an important predator from a key time in the evolution of life on Earth.

Scientists on Tuesday said the creature, called Cambroraster falcatus, was a distant relative of today`s arthropods - the diverse group of animals including insects, spiders and crabs - and lived during the Cambrian Period 506 million years ago, when all animal life lived in the oceans.

"Most animals in the Cambrian Period were small, typically a few centimetres long at most. By comparison, Cambroraster was a giant, at up to a foot long (30 cm)," said paleontologist Joe Moysiuk of the Royal Ontario Museum and University of Toronto, lead author of the research published in the journal Proceedings of the Royal Society B.

Cambroraster was excavated in Kootenay National Park in the Canadian Rockies from a rock formation known as the Burgess Shale that has yielded fossils of a wondrous array of Cambrian animals. The Cambrian was a time of evolutionary experimentation when nearly all major animal groups first appeared and numerous oddballs came and went.

"With its huge head, small body and upward facing eyes, Cambroraster superficially resembles a horseshoe crab, although in detail they are quite different animals," Moysiuk said. "Just like horseshoe crabs, we think Cambroraster spent its time hanging around near the sea floor, feeding on organisms buried in the mud."

Its large head was covered by a shield-like carapace whose shape reminded the scientists of the Millennium Falcon spaceship of "Star Wars" fame. At the front of its body were two large claws with a succession of parallel outgrowths like a series of rakes, letting it sift through seafloor mud and strain out any prey. Tooth-like plates surrounded its circular mouth. It may have dined upon worms, small fish and larvae.

It belonged to the same group - radiodonts - as the apex predator of the time, called Anomalocaris, a dangerous hunter reaching three feet (one meter) long that may even have targeted Cambroraster.

Radiodonts, among the earliest offshoots of the arthropod lineage, are usually known from fragmentary remains. But the scientists found such a large number of beautifully preserved and complete Cambroraster fossils that they achieved a breakthrough in the understanding of this significant extinct group