From pole to pole, 2 expeditions, 110 years apart: ISRO's epic tweet ahead of Chandrayaan 2 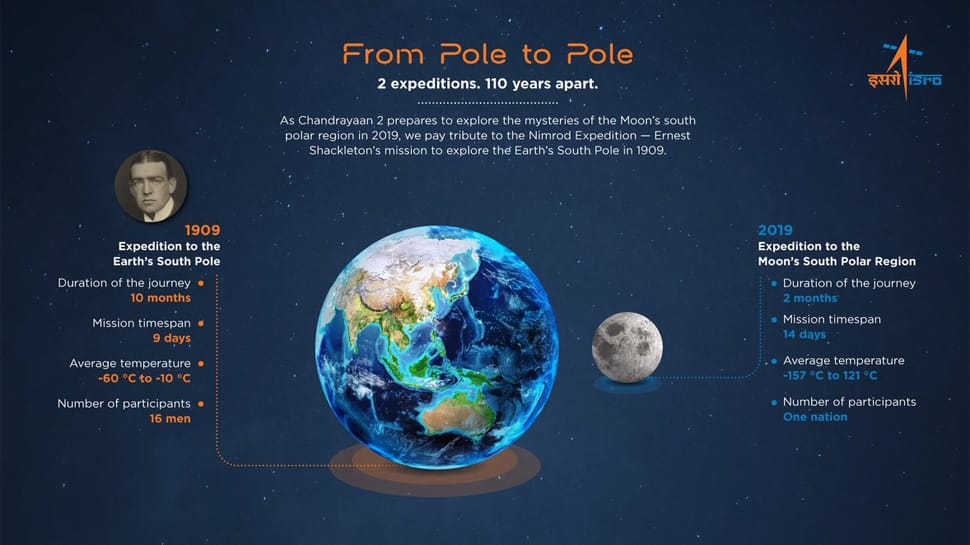 Sharing an image, ISRO writes, “From pole to pole. 2 expeditions. 110 years apart. As Chandrayaan 2 prepares to explore the mysteries of the Moon south polar region in 2019, we pay tribute to the Nimrod Expedition – Ernest Shackleton's mission to explore the Earth's South Pole in 1909.”

Led by British polar explorer Shackleton, the 16-member Nimrod Expedition was the first expedition to the Antarctic to explore the previously unchartered territory and conduct a range of geographical and scientific experiments. The 10-month-long journey was the longest southern polar journey at the time with the crew braving average temperatures of -60 degrees Celcius to -10 degrees Celcius. The mission had a timespan of nine days.

Comparing it with Chandrayaan 2 expedition, ISRO writes that India's second lunar sojourn will reach moon's south polar region in two months and brave average temperatures of -157 degrees Celcius to -121 degrees Celcius. The mission has a timespan of 14 days.

2 Expeditions. 110 years Apart.
Read on to find out more... pic.twitter.com/e2CHWrYpxD

Chandrayaan-2 will be launched on July 15 and is touted to be the Indian space agency's most complex mission to date. The nearly Rs 1,000 crore mission will witness landing on the moon near the South Pole on September 6 or 7 on uncharted territory. The spacecraft, with a mass of 3.8 tonne, has three modules -- Orbiter, Lander (Vikram) and Rover (Pragyan). Chandrayaan will carry 13 Indian payloads (8 on orbiter, 3 on lander and 2 on rover) and one passive experiment from NASA.