Aliens visiting? Crashed UFO on Mars and one hovering over navy base in California spotted 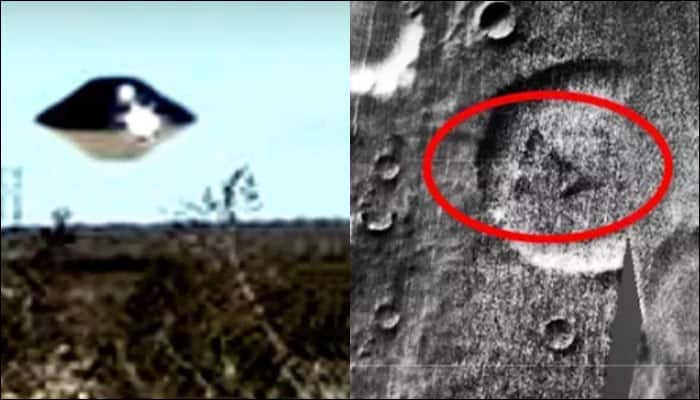 New Delhi: UFO and alien-related findings are a hot topic among people across the world and the latest one to do the rounds comes directly from Mars itself.

A strange triangular-shaped object has been found buried on the surface of the Red Planet and some believe it is a sign of a crashed UFO.

A video uploaded on YouTube by conspiracy theorist channel SecureTeam10 revealed the discovery.

The video narrator said: “There is no doubt that there is something of an almost perfect triangular-shaped nature, albeit a little dented up and a little warped, but it doesn’t look like it belongs there.”

Speaking about the close proximity of the “crashed UFO” to the “alien base”, he added: “When you find another object in the same general area that again looks out of place. We have found these domes on multiple planets and moons.”

“Even NASA and our own space agencies have talked about getting us to the moon and establishing bases have drawn up their plans using the exact same thing – domes,” he continued.

“Could that be what we’re seeing here? A camouflage among this crater field. Or is this some sort of ancient relic?” the narrator asked.

While many UFO/alien hunters from around the world have sworn that extraterrestrial life exists, NASA has dismissed these claims, leading alien hunters to believe that the space agency is deliberately trying to hide alien existence.

Meanwhile, the video also talks about images of a UFO spotted hovering in the air over the desert near the Naval Air Weapons Station China Lake in California.

The images were apparently captured in 2007, but released recently by a man called Keith Bradshaw (pseudonym), who was 'too nervous' to show anyone until now.

According to reports, Keith says he went out to the desert after being told about the craft by a friend.

“This thing would wobble along close to the ground, very unstable," he told the Daily Star.

“Then it would freeze in position, go up to a certain height and sit there for a few minutes perfectly still. It made no noise that I could hear."

Keith said that he watched the craft for about ten minutes. He also claimed he saw the silver UFO while a number of military vehicles were parked nearby.

There was even a military helicopter flying around at the time.

“I don’t believe anyone could have been riding on the inside, but I got the idea the helicopter was somehow remotely controlling it," he said.

“It looked like whoever was controlling it was having fun with it, sometimes because they would do little tricks with it.”

By opening the pictures up to the world, Keith hopes to open the conversation about whether we've been visited by extraterrestrials – or whether it was simply some new kind of military hardware that he witnessed.

As per a report in the Mirror, he provided the pictures to 54-year-old UFO sleuth Philip Mantle, who says he hasn't seen anything like this in over 40 years of research.

Mantle has described them as "the most controversial UFO photos on record" and adds experts are unable to agree if the photographs are real.

Pair of rare hyper-luminous galaxies spotted for the first time