Juno captured this image when the spacecraft was only 11,747 miles (18,906 kilometers) from the tops of Jupiter’s clouds — that’s roughly as far as the distance between New York City and Perth, Australia. 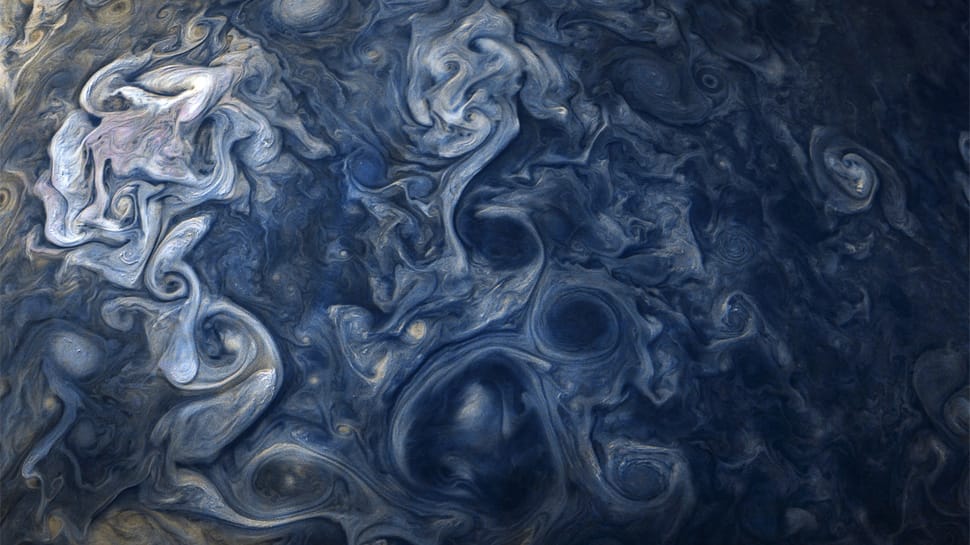 New Delhi: Ever since its smooth transit from Earth into its destined orbit around Jupiter, NASA's Juno spacecraft has been beaming back some amazing data on the planet as well as giving space enthusiasts spectacular visual treats from time to time.

With many turning points marking its one-year-long journey in Jupiter's orbit, Juno has revolutionised the world's perception and understanding of the gas giant.

In another magnificent image released by NASA, Jupiter can be seen showing off its Jovian clouds in striking shades of blue.

Juno captured this image when the spacecraft was only 11,747 miles (18,906 kilometers) from the tops of Jupiter’s clouds — that’s roughly as far as the distance between New York City and Perth, Australia.

The color-enhanced image, which captures a cloud system in Jupiter’s northern hemisphere, was taken on October 24, 2017 at 10:24 am PDT (1:24 pm EDT) when Juno was at a latitude of 57.57 degrees (nearly three-fifths of the way from Jupiter’s equator to its north pole) and performing its ninth close flyby of the gas giant planet.

According to NASA, because of the Juno-Jupiter-Sun angle when the spacecraft captured this image, the higher-altitude clouds can be seen casting shadows on their surroundings.

The behavior is most easily observable in the whitest regions in the image, but also in a few isolated spots in both the bottom and right areas of the image.