Scientists have discovered glowing water molecules in the atmosphere of a planet outside our solar system. 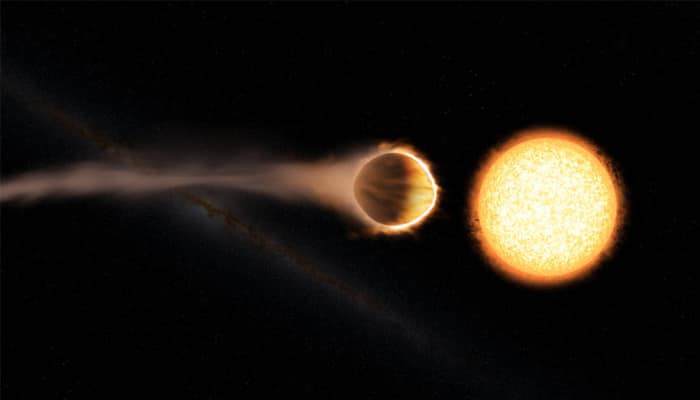 Washington: For the first time, scientists have discovered glowing water molecules in the atmosphere of a planet outside our solar system.

It is the strongest evidence to date for a stratosphere on a planet outside our solar system, or exoplanet.

The planet called WASP-121b is a gas giant exoplanet commonly referred to as a "hot Jupiter." It was located approximately 900 light years from Earth.

Finding glowing water molecules on the planet's atmosphere, however, may not men detecting signs of alien life as its stratosphere - a layer of atmosphere where temperature increases with higher altitudes - is hot enough to boil iron.

Mark Marley, study co-author based at NASA's Ames Research Center in California's Silicon Valley said,"This result is exciting because it shows that a common trait of most of the atmospheres in our solar system -- a warm stratosphere -- also can be found in exoplanet atmospheres."

Marley said,"We can now compare processes in exoplanet atmospheres with the same processes that happen under different sets of conditions in our own solar system."

The discovery reported in the the journal Nature was made using NASA's Hubble space telescope.

Drake Deming, Professor of Astronomy at University of Maryland and a co-author of the study said,"The stratosphere of WASP-121b so hot it can make water vapour glow, which is the basis for our analysis."

To study the gas giant's stratosphere, scientists used spectroscopy to analyse how the planet's brightness changed at different wavelengths of light.

Water vapour in the planet's atmosphere, for example, behaves in predictable ways in response to certain wavelengths of light, depending on the temperature of the water.

The water molecules in the atmosphere of WASP-121b give off radiation as they lose energy, but it is in the form of infrared light, which the human eye is unable to detect.

"Theoretical models have suggested that stratospheres may define a special class of ultra-hot exoplanets, with important implications for the atmospheric physics and chemistry," said Tom Evans, research fellow at the University of Exeter in Britain and lead author of the study.

Evans said,"When we pointed Hubble at WASP-121b, we saw glowing water molecules, implying that the planet has a strong stratosphere."

WASP-121b has a greater mass and radius than Jupiter, making it much puffier.

But while Jupiter revolves around our Sun once every 12 years, WASP-121b has an orbital period of just 1.3 days.

This exoplanet is so close to its star that if it got any closer, the star's gravity would start ripping it apart.

This close proximity also means that the top of the atmosphere is heated to a blazing hot 2,500 degrees Celsius - the temperature at which iron exists in gas rather than solid form.

"This new research is the smoking gun evidence scientists have been searching for when studying hot exoplanets," said David Sing, Associate Professor University of Exeter and a co-author of the research paper.

"We have discovered this hot Jupiter has a stratosphere, a common feature seen in most of our solar system planets," Sing added.