The photograph was taken by the AQUA satellite as it passed over a remote archipelago in the South Atlantic Ocean. 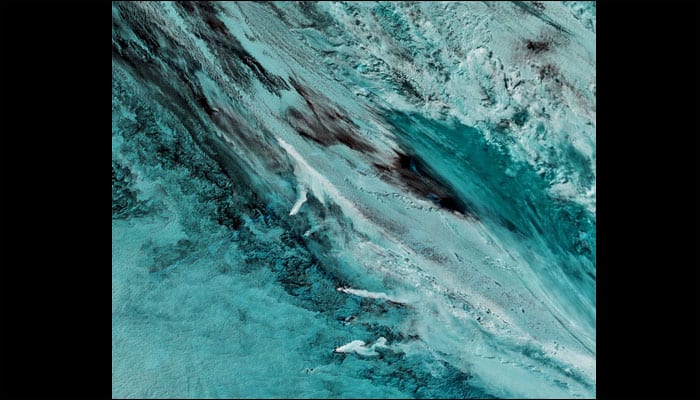 New Delhi: NASA has many satellites doing the rounds of the Earth. On 29th September, one of them – AQUA, a multi-national NASA scientific research satellite, which studies the precipitation, evaporation, and cycling of water – captured a stunning image.

The photograph was taken by the AQUA satellite as it passed over a remote archipelago in the South Atlantic Ocean.

All three volcanoes are stratovolcanoes, which are a type of composite volcano built of layers of lava, ash and stone. The photographed volcanoes are located on the South Sandwich Islands, which are about 1,700 miles (2,800 kilometers) southeast of Buenos Aires, Argentina.

Due to their isolated locales and unwelcoming surroundings, these volcanoes are the least studied in the world, though satellites frequently catch them erupting.

The image of the erupting volcanic plumes was taken by NASA's satellite in false-colour, since clouds and ice in the region make it difficult for satellites to see volcanic activity in natural-color imagery, NASA said.

Volcanic eruptions in remote, uninhabited places like the South Atlantic would likely go unnoticed without satellites and seismic monitoring, according to NASA. But the agency said these technological advances have given scientists new insights into volcanic activity around the world.