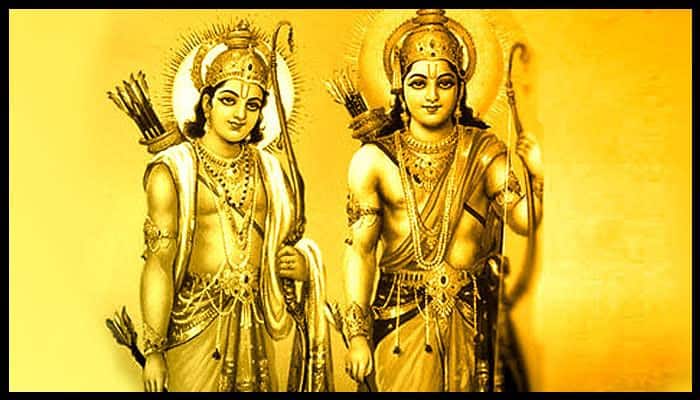 The lore of Lord Ram and Ravan is as old as time.  We know about its major lessons and present them in the most simplistic way for common understanding. The virtue of Sita, the valour of Ram, the deceit of Ravan and the end of it all – light wins over darkness, goodness over evil.

But each page of the fascinating tale as encapsulated in the several versions of Ramayana is engaging and an enriching insight into various facets of life. The epic brings godliness closer to human experience and allows for a person to feel that he too can live a righteous life in a modern context.

What really endures are underlying truths of existence which are as relevant now as they were then.

As per Ram Charit Manas, it so happened that once during their exile into the forests, Sita was away to pick some flowers and berries. Finding Lord Ram alone and relaxed, Lakshman, his devoted younger brother, approaches him with humility and curiosity.

Knowing him to be divinity in human form, he asks about these persisting concepts of life that have intrigued mankind since the beginning of existence.

In the conversation that follows, light is shed on 5 most pertinent realities:

Lakshmana: What is Maya (Illusion)?

Lord Ram: The feeling of “I” and “mine” and “you” and “yours” is Maya (Illusion), which holds sway over all created beings. Whatever is perceived by the senses and that which lies within the reach of the mind, know it all to be Maya.

Lord Ram: Maya has two divisions, viz., Gyan (knowledge) and ignorance. Ignorance is vile and extremely painful, and has cast the ego into the sink of worldly existence. The other Gyan (knowledge), which brings forth the creation and which holds sway over the three Gunas (Sattva, Rajas and Tamas) is directed by the Lord and has no strength of its own. Spiritual wisdom is that which is free from all blemishes in the shape of pride etc., and which sees the Supreme Spirit equally in all. Gyan (spiritual wisdom) comes of the practice of Yoga (concentration of mind); and wisdom is the bestower of liberation, so declare the Vedas.

Lakshmana: What is Vairagya (Detachment /Dispassion)?

Lord Ram: He alone, dear brother, should be called a man of supreme dispassion, who has spurned all supernatural powers as well as the three Gunas (of which the universe is composed) as if of no more account than a blade of grass. Dispassion is a result of the practice of virtue.

Lakshmana: What is Bhakti (Devotion)?

Lord Ram: That which melts my heart quickly is devotion, which is the delight of my devotees. It stands by itself and requires no other prop; whereas Gyan (knowledge of God in His absolute formless aspect) and Vigyana (Science / knowledge of the qualified aspect of God, both with and without form) depend on it. Devotion is incomparable and the very root of bliss; it can be acquired only by the favour of saint. I now proceed to tell you at some length the means of acquiring devotion, an easy path by which men find me.

In the first place a man should cultivate excessive devotion to the feet of the Brahmanas and secondly he should remain engaged in his own duty according to the lines laid down by the Vedas. This induces an aversion to the pleasures of sense and dispassion in its turn engenders a love for my cult (the cult of devotion). This will bring steadfastness in the nine forms of devotion such as Sravana (hearing of the Lord’s praises etc.,) and the mind will develop an excessive fondness for my pastimes. Again, one should be extremely devoted to the lotus feet of saints and should be persistent in the practice of adoration through mind, speech and action. He should recognize me as his preceptor, father, mother, kinsman, lord, deity and all and should be steadfast in my service. A thrill runs through his body as he sings my praises; his voice gets choked and his eyes flow with tears; he is free from lust and other vices, pride and hypocrisy. I am ever at the beck and call of such a devotee.

Nay, I ever repose in the lotus heart of those who depend on me in thought, word and deed and who worship me.

Lakshmana: What is the difference between a Jiva (human/individual soul) and God?

Lord Ram:  That alone deserves to be called a Jiva (individual soul), which knows not Maya nor God nor one’s own self. And Shiva (God) is He who awards bondage and liberation, transcends all and is the controller of Maya.

(Courtesy: Gita Press for translation from Hindi to English)