Sthanumalayan: An amalgamation of Brahma, Vishnu and Shiva – A rare occurrence!

This is perhaps the only temple where one can worship the three deities installed in the same sanctum sanctorum with each of them distinctively visible to the devotees. 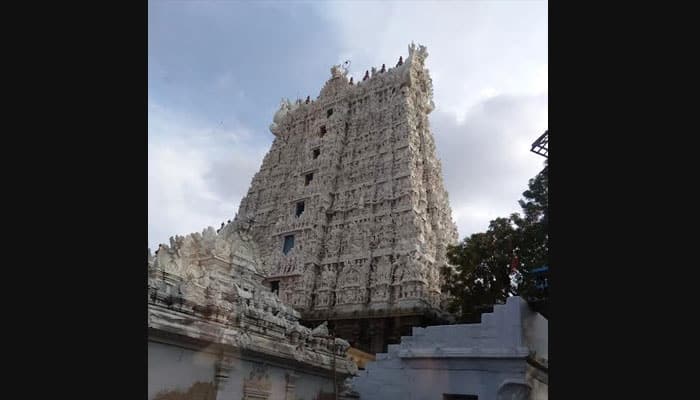 Here’s a temple town named Suchindram located in the Kanyakumari district of Tamil Nadu which is home to a rare amalgamation! You can find a Linga in three parts dedicated to each of the Hindu trinity – Shiva, Vishnu and Brahma.

This is perhaps the only temple where one can worship the three deities installed in the same sanctum sanctorum with each of them distinctively visible to the devotees. Illuminated by oil lamps, the three parts of the Linga represent the trinity that symbolise creation (Brahma), sustenance (Vishnu) and destruction (Shiva).

The temple derives its name from a combination of the trinity where Sthanu means Shiva, Mal – Vishnu, Ayan –Brahma.

The main Garbha Griha is flanked by gigantic sculptures of Nandi and Garuda, vehicles or vahanas of Shiva and Vishnu respectively.

The current temple complex is a beautiful specimen of Dravidian architecture dating back to the 17th century. The 7 tiered temple tower or Gopuram depicts intricately carved figures of deities, gods and goddesses. The inner walls and pillars within the temple complex too display the brilliant architectural craftsmanship of the glorious bygone era where art and architecture were at its zenith.

Besides the Sthanumalayan Linga, the other major attraction is the series of 4 musical pillars each about 18 feet tall in the Alangara Mandapam that produce distinct melodious sounds. These pillars are believed to be carved out of a single piece of rock. There are over 1000 more pillars within the temple complex.

The temple is also home to 22-feet tall Hanuman statue etched out of a single granite block. Apart from this, there are as many as 30 other shrines within the temple complex.

A huge Ratha or chariot can be spotted right outside the main entrance of the temple and its might displays the glorious traditions influenced by the Vaishnavite and Shaivite cultures.

Prior to the merger of Kanyakumari with Tamil Nadu, the temple was managed by the Maharaja of Travancore.

Buddha Purnima 2017: The legend behind Gautama Buddha's transformation from a prince to a spiritual seeker