The Legend behind the manifestation of Goddess Chandraghanta

Chandraghanta, the manifestation of Goddess Durga, also known as Chandrakhanda, Chandika or Rannchandi is worshipped by the devotees on the third day of Navratri. It is believed that the sound of her bell terrorises the demonic incarnations and evil forces. 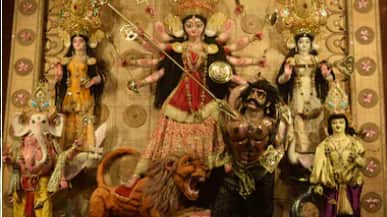 New Delhi: With the advent of Navratri, there is bliss and excitement everywhere with colourful and exhilarating celebrations. Today is the third day, Goddess Chandraghanta is worshipped by the devotees. She is sought as the epitome of courage and compassion together. The legend behind the incarnation of Goddess Chandraghanta dates back to the time of marriage of Lord Shiva and Goddess Parvati.

After immolation of Sati, Lord Shiva was resolute in not marrying any other woman ever again. However, Parvati's efforts and tapp softened the emotions of Lord Shiva. Overwhelmed by her devotion and the sufferings she bore, he agreed to marry her.

Shiva dressed in his intimidating attire arrived with a procession of gods, mortals, ganas, sages, ghosts and aghoris smeared in ash, dancing to the tunes of elation and joy to marry Goddess Parvati and take her along to Mount Kailash.

At the sight of the crowd, King Himavan (Parvati's father) was appalled and Menavati Devi (Goddess Parvati's mother) fainted in terror. Witnessing Shiva's form, Parvati transformed herself into Goddess Chandraghanta and persuades him to re-appear in a charismatic attire. Complying to her request, Lord Shiva returns in an alluring and captivating attire as a prince, dressed up in beautiful garments and embellished with innumerable jewels. He married Goddess Parvati and the wedding solemnized as per the rituals.

By the grace of Goddess Chandraghanta, all the sins, sufferings and hurdles of her devotees are expunged. Riding on the ferocious lion, she exudes fearlessness in her devotees and also embodies them with serenity.

Goddess Chandraghanta, loaded with weapons in nine of her hands and giving blessings from her tenth hand, wearing half moon over her head and a third eye on her forehead is ever ready to annihilate the evil but always compassionate to her devotees.

Navratri special: The origin and existence of the 51 Shaktipeethas