Commonwealth Games champion Kashyap, who is coming from an injury, went down fighting in men's singles against China's Huang Yuxiang. 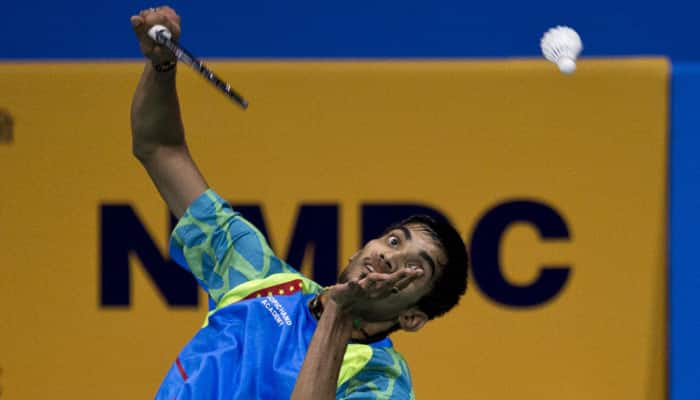 Lucknow: Defending champion P Kashyap bowed out while top seed K Srikanth entered the semifinals but it was the stunning win of doubles pair of Pranaav Jerry Chopra and Akshay Dewalkar over their world number eight opponents from Denmark that was the highlight of the day at Syed Modi Grand Prix Gold badminton tournament here on Friday.

Commonwealth Games champion Kashyap, who is coming from an injury, went down fighting in men's singles against China's Huang Yuxiang 16-21 21-18 15-21 in the last match of the day at the BBD U P Badminton Academy here.

World No. 9 Srikanth had to dug deep in his reservoir to survive a scare from Goh Soon Huat of Malaysia in another men's singles match. In the end of the 76-minute duel, Srikanth eked out a 21-17 18-21 24-22 win over Goh. The top seeded Indian will next take on 11th seed Thai Boonsak Ponsana.

Men's doubles pair of Pranaav Jerry Chopra and Akshay Dewalkar set the tone for the day when they edged out third seeds Mads Conrad-Petersen and Mads Pieler Kolding of Denmark 22-20 11-21 23-21 in a match that lasted an hour and seven minutes.

However, it was the end of the giant-killing run of young Harsheel Dani as he lost 14-21 11-21 to China's Shi Yuqi in another men's singles match.

Pranaav and Akshay dished out sweet revenge early in the day when they sent the third seeds packing in men's doubles.

The World No. 36 duo, who had lost to the Denmark pair during the World Championship last year, fought back from 9-15 and 18-20 behind in the opening game to earn an early advantage.

In the second game, the Indians lead 4-2 initially but Conrad-Petersen and Kolding turned the tables and marched ahead with gaint steps to roar back into the contest.

In the decider, Pranaav and Akshay opened up a 11-9 lead but their rivals were in control at 14-12 but in the end it was the Indians who had the last laugh.

In the men's singles match, World No. 53 Goh gave a run for the money to Srikanth, who after winning the opening game struggled against the Malaysian before somehow managing to edge him out.

In the first game, it was a flawless game as Srikanth led from the start to the end to earn the bragging rights. In the second, the Indian squandered a 18-10 advantage to allow Goh bounce back by reeling off 11 straight points.

In the decider, Goh led 5-2 early on but Srikanth engaged in a neck and neck battle to stay ahead by a slender 14-12.

However, Goh slowly managed to wrest back the advantage. After a long rally, Srikanth's smash went wide as Goh took a slender 15-14 lead. The Indian once again found the net as the Malaysian took a 17-15 lead. Srikanth wrested the lead at 18-17 only to give it back when he failed to connect a shot in the forecourt despite a dive.

The Indian sent another one wide before producing a smash which grounded Goh as he led 20-19. Another wayward shot from the Indian and it was level par. A net error and Goh grabbed the advantage.

The Malaysian then made a judgment but Srikanth also rushed into a shot and found the net. Goh then found the net and let one go at the back as Srikanth pumped his fist in the air.

In the final match of the day, Kashyap looked off-colour as his unforced errors put paid to his hopes of defending the title.

After an initial battle till 5-5, the Chinese walked away with the first game after slowly inching ahead. In the second, Kashyap was up 9-6 but a couple of errors at the net robbed him of the lead.

However, after a disruption of play following a dimming of lights, Kashyap eked out a 15-12 lead. A couple of smashes swelled his lead to 18-14. The Chinese narrowed it down to 17-18 but the Indian grabbed one with a smash.

At 19-18, Huang hit long to give the game point to Kashyap and he sealed it when his rival found the net again.

In the decider, Kashyap failed to connect his shots as Huang led 6-1. The Indian reduced the deficit but the Chinese still managed to lead 11-10 at the break with a push when the Indian took his eye off. Kashyap drew parity at 13-13 with a smash and when his rival went wide.

Unforced errors and a smash going wide again gave a three point advantage to 17-13 lead. A series of errors then left Kashyap exasperated as he handed five match points to 20-15 and then failed to collect a low return at the forecourt as the Chinese celebrated.